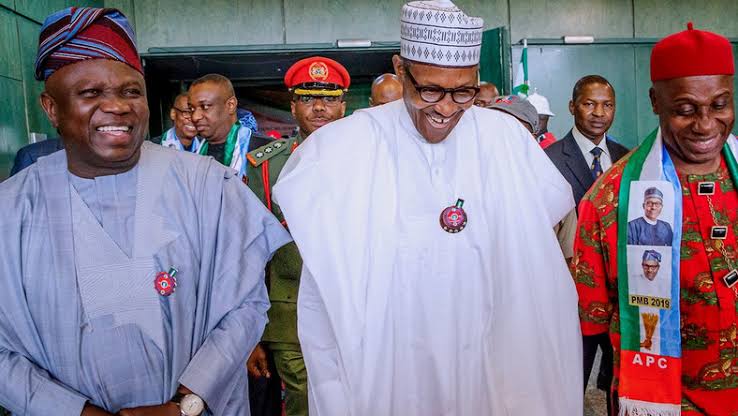 Former State governors who failed to be re-elected are set to emerge as Ministers representing their states in President Muhammadu Buhari‘s next level cabinet.

It was gathered that former governors of Lagos, Adamawa and Bauchi states, Akinwunmi Ambode, Mohammed Bindow and Mohammed Abubakar, may make the cabinet.

According to The Punch, leaders of the All Progressives Congress (APC) agreed that governors who could not win re-election in their states will automatically take up the ministerial slot for their respective states.

Confirming the development, APC Organising Secretary, Adamawa State chapter, Ahmed Lawan, said the leadership of the party had yet to call for any list from the state chapter.

He stated that former governor of Bauchi, Bindow, might be “automatically” nominated for the state after losing his re-election to the Fintiri of the Peoples Democratic Party (PDP).

Following the development, Ambode who lost in a controversial primary election to Governor Babajide Sanwo-Olu may represent Lagos while Abubakar who lost to PDP’s Bala Mohammed may clinch the Bauchi State slot.

Meanwhile, indications have emerged that loyalists of the National Leader of the APC, Bola Ahmed Tinubu, are working hard to scuttle the nomination of Ambode despite his closes to Buhari.

Tinubu’s men are alleging that the former governor frustrated many party members in Lagos State during his tenure and there was, therefore, the need “to teach him a lesson.”

Ambode who returned to the country from France a few days ago may be dragged to the Economic and Financial Crimes Commission (EFCC) over alleged financial misappropriation and corruption.

Sources within the Lagos APC told The Punch that Ambode was not a loyal party man as he offended some party members and any move to reward him would be opposed vehemently by the party.

One of the sources said, “Ambode tried to destroy the party in his first term. Apart from not being accessible, he revoked contracts belonging to party members and brought in his own companies. He tried to destroy our chances by trying to undermine Sanwo-Olu at every turn.

“He did not campaign for us. Rather, he was following Buhari all over the place. He should not expect to represent Lagos in any capacity. We will not allow him have any appointment.”

“Ambode is from Ondo State and he cannot deny it. Yes, he was governor in Lagos State but the constitution allows that. However, the constitution states clearly that only an indigene of a state can represent that state as far as ministerial appointments are concerned.

“We will ensure that the three senators from Lagos State block his nomination in the event that he is nominated by the President. There must be party discipline,” another source added.

However, a source in the camp of the former Lagos State governor revealed that Ambode is battle ready to tackle is opponents.

The former aide said, “Ambode is already prepared for the worst since they have already humiliated him. Buhari even appealed to them to let Ambode return as governor but they refused. They then tried to impeach him but they failed.

“They should remember that Ambode was a permanent secretary and accountant-general of the state before becoming a governor.

“He knows the secrets of all those making threats. Anybody who is on a mission of revenge could be digging his own grave in the process. I won’t say more than that.”