In the last three years of his government, President Muhammadu Buhari supporters can vouch for him that he has changed the county but others would say that he has done nothing.

But one thing that the President is very good at his annoying Nigerians with his statements, he’s used to saying things that annoys several Nigerians when he travels abroad.

A fortnight ago in London, President Buhari said “More than 60 per cent of the population is below 30, a lot of them haven’t been to school and they are claiming that Nigeria is an oil producing country, therefore, they should sit and do nothing, and get housing, healthcare, education free,”

This is not the first time he would provoke Nigerians with his statement. Lets take a look together.

Aisha’s place in the house 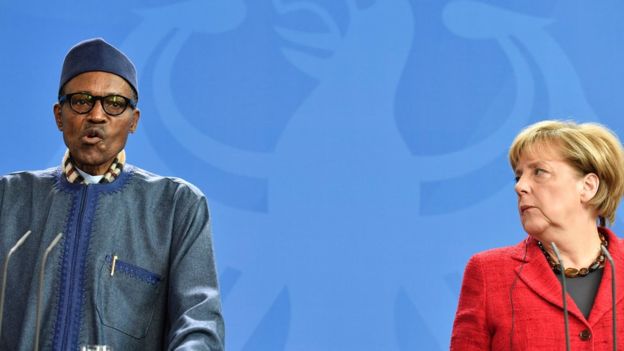 Nigeria first lady Aisha Buhari belong in his house, according to her husband

During a joint press conference with one of the most powerful women in the world, Germany leader Angela Merkel, Buhari answered a question about his wife Aisha who criticized his government by saying “I don’t know which party my wife belongs to, but she belongs to my kitchen and my living room and the other room.” A statement that generated a lot of uproar on social media.

Yes, we are fantastically corrupt

Former UK Prime Minister David Cameron was speaking at a big anti-corruption conference but he had no clue that his microphone was still on.

When Cameron told the Queen that ‘Nigerians are fantastically corrupt‘, many people in Nigerian and International community where angry because President Buhari who was present could not speak against Cameron.

Imagine the surprise of many Nigerians when our own president said in an interview that Cameron has said it the way it is.

At a business meeting during Commonwealth summit for London, where leaders of Nations where supposed to talk  about how to grow their economy and convince investors to come to their country, Buhari told the whole world that a lot of his youths were uneducated.
He said Nigerian youths like free things:

“More than 60 percent of the population is below 30, a lot of them haven’t been to school and they are claiming that Nigeria is an oil producing country, therefore, they should sit and do nothing, and get housing, healthcare, education free.”

Buhari just became president and during one of his official visit to the US, he gave a speech about Nigeria’s security and terrorism at the United States Institute of Peace (USIP).

When he finished, he was asked a question about how his government would handle the issue of Niger Delta as it relates to amnesty, bunkering and carrying everybody along. Buhari said “I hope you have a copy of the election results. The constituents, for example, gave me 97% [of the vote] cannot in all honesty be treated on some issues with constituencies that gave me 5%”