The leader of the outlawed Indigenous People of Biafra (IPOB), Mazi Nnamdi Kanu, on Monday 26, July 2021, continued his trial at the Abuja High Court.

The Muhammadu Buhari-led Federal Government is expected to amend the charges against the IPOB leader.

AGF Abubakar Malami had accused Nnamdi Kanu of ordering the killing of security operatives in the South-East and South-South.

Stick with Naija News as we bring updates on the trial:

12.00 am: The trial of the leader of the Indigenous People of Biafra (IPOB), Nnamdi Kanu, has been postponed.

Naija News reports that the IPOB leader’s trial was adjourned till October 21st, 2021.

The trial suffered a setback after the Department of State Services (DSS) failed to produce Kanu in court.

10.30 am: The Police has arrested some members of the Indigenous People of Biafra (IPOB) who stormed the federal high court in Abuja on Monday for the trial of their leader, Nnamdi Kanu.

The IPOB members who stormed the court area, with some of them dressed in Jewish apparel were chanting slogans in support of Kanu and demanding his freedom.

10.00 am: A video has been spotted online showing security operatives hindering solidarity lawyers of the IPOB leader from accessing the courtroom.

A lawyer could be seen in the video expressing his displeasure about the actions of the security operatives. 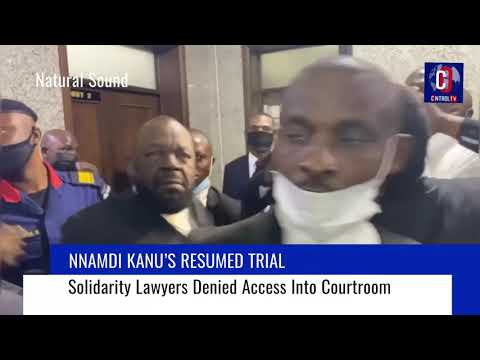 09.00 am: Operatives of the Nigeria Police on Monday dispersed some members of the Indigenous People Of Biafra (IPOB) gathered near the Federal High Court in Abuja for the trial of their leader, Nnamdi Kanu.

The IPOB members had stormed the court in solidarity with their leader who is expected in court today.

As the number of IPOB supporters increased, policemen moved in and chased them away from the place.