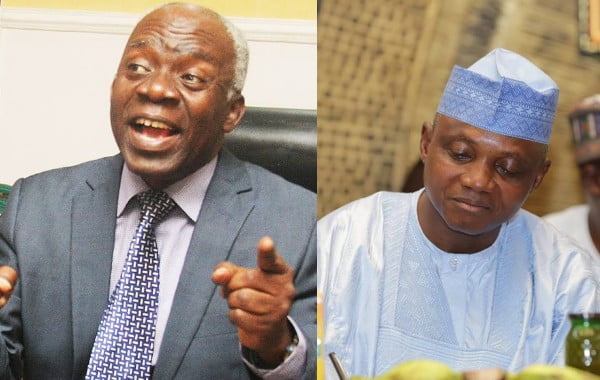 Naija News reports that Garba Shehu had accused Sowore of attempting to twist the facts surrounding the visit of Isa Funtua and other persons to him while in custody.

Shehu also threatened that the Department of State Services (DSS) may be petitioned to make the tape of the visit public except Sowore desists from making untrue claims.

Recalls Isa Funtua, who died on Monday and other newspaper publishers had visited Sowore in 2019 while he was in prison custody where he was detained by the DSS for over four months ahead of #RevolutionNow, a nationwide protest against the government.

He was released in December but restricted to the federal capital territory (FCT).

After Funtua’s death, Sowore alleged that Funtua and others who visited him in prison had told him to drop his ‘revolution’ protests and stop fighting the government as a condition for his release.

However, the Presidential media aide in a series of posts on Twitter on Tuesday has refuted claims that any such offer or demand was made to Sowore while in prison.

Shehu said the visit was not to negotiate Sowore’s release, adding that Sowore felt happy when the first meeting held in Abuja but a subsequent one where the delegation met Sowore’s lawyer in Lagos, collapsed.

Reacting in a post on Facebook to Garba Shehu’s threat, Sowore asked the presidential aide to also release a tape of Abba Kyari asking the DSS to detain him till 2023.

The Sahara Reporters publisher also explained that the trending interview on Funtua was not new but an old one which only began circulating after Funtua’s demise on Monday.

Reacting in a statement on Thursday, Falana said Garba Shehu’s memory failed him in his jejune narrative.

He said: “Mr. Shehu ought to have published the terms of the ‘resolution’ which he claimed that Mr. Sowore had accepted instead of blaming the collapse of the “fence-mending process” on the intransigence of his lawyer ‘whoever that was (sic)’

“I confirm that I held a meeting with the trio referred to by Mr. Shehu even though he did not mention my name. Hence, I am compelled to react to a couple of issues raised in his incendiary account. More so that he did not attend the Lagos meeting. For reasons best known to Mr. Shehu, he refused to inform the Nigerian people that I rejected the gratuitous request to prevail on Mr. Sowore to apologise to President Muhammadu Buhari and write an undertaking to desist from further embarrassing the federal government.

“Apart from insisting that my client had committed no offence by exercising his freedom of expression over the perilous state of the nation, I expressed my personal agony over the request because I won the legal battle wherein the court of appeal had upheld the fundamental right of the Nigerian people to protest against the government without police permit.

“Mr. Shehu ought to have equally disclosed that I demanded for the unconditional release of my client from the unlawful incarceration of the State Security Service. In fact, when the late Alhaji Isa Funtua said rather condescendingly at the Lagos meeting that the regime in power could not be defeated, I was quick to remind him that the Nigerian people had defeated military dictators to pave way for the current civilian dispensation.”

Falana recalled that he teamed up with other patriots in 2006 to campaign for the release of Shehu, who was then spokesperson of former Vice-President Atiku Abukakar, when he was detained by the DSS State and charged with the offence of “obtaining, reproducing and keeping classified material” in contravention of the official secrets act.

He said the charge filed against Shehu was withdrawn and struck out in his favour.

“In like manner, the charge of treasonable felony which is hanging menacingly on the head of Mr. Omoyele Sowore like a sword of Damocles will also be struck out in his favour in the fullness of time,” he said.