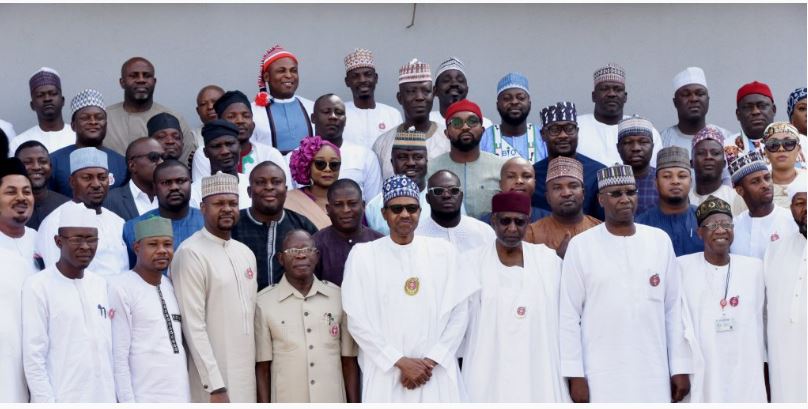 Naija News has been informed of the meeting between President Muhammadu Buhari and National Youth Leaders of the APC.

It was reported that youth leaders from the six geo-political zones in Nigeria paid a courtesy visit to the President in Aso Villa, Abuja, on Friday.

The meeting receives the presence of National Chairman of the ruling party, Mr Adams Oshiomhole; the Secretary to the Government of the Federation, Mr Boss Mustapha; and the Chief of Staff to the President, Mr Abba Kyari.

Discussions in the courtesy visit were not made public, but the youth leaders among other things enjoyed a ceremonial presidential handshake from President Buhari, following some photo session.

Meanwhile, The All Progressives Congress national leader, Bola Tinubu, has noted that leaders in the country must handover a strong and vibrant Nigeria to the youths.

The former governor of Lagos State in his statement stated that youths in the country are the destiny of the nation, he further stated that young Nigerians would be better equipped if their education is entrenched on innovation and new technology.

Tinubu stated this while receiving an honorary degree of Human Letters given to him by Ibrahim Badamosi Babangida University, Lapai, Niger State.