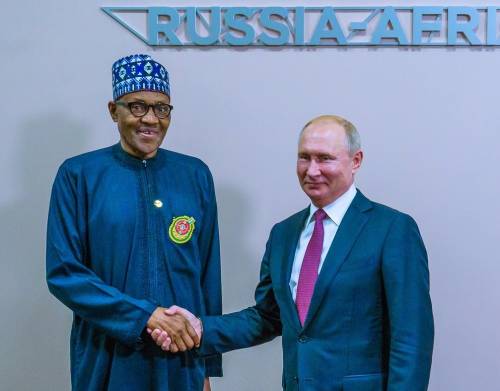 Unconfirmed report reaching Naija News suggests that Russia and Nigeria might have signed a deal for Moscow to supply 12 Mi-35 attack helicopters to Nigeria.

A senior official at Russia’s federal military-technical cooperation service was quoted to have revealed the latest plan between Nigerian and Russia on Wednesday, the RIA news agency had also reported.

The contract was reportedly announced as Russia welcomed dozens of African heads of state to the southern Russian city of Sochi amid a push by Moscow for clout on the continent.

The Nigeria’s President Muhammadu Buhari and Russian President, Vladimir Putin, has also on Wednesday in Sochi, Russia, agreed to put Nigeria-Russia relations on a fast track.

Both Presidents have also reactivated ties to pursue the completion of all abandoned projects initiated by both countries.

This was made known in a statement by Senior Special Assistant on Media and Publicity to President Buhari, Garba Shehu.

The statement noted that the two leaders agreed to start new infrastructure projects and expand trade and investment, security and military cooperation.

The statement obtained by Naija News reads as thus; “The cooperation, in a way will see to the rehabilitation of epileptic oil refineries through establishment of framework for a joint venture between Nigerian National Petroleum Corporation and Russia-based leading oil company, Lukoil.

“The issue of uncompleted and abandoned Ajaokuta Steel Rolling Mill was presented by President Buhari.

“His request for the return of Russia, on a government-to-government relationship for completion and commissioning of the plant, was accepted by President Putin.”