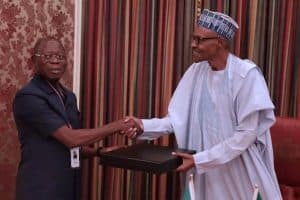 Naija News learnt that the former Labour leader who is aspiring to be next National Chaiman of the All progressive congress party stated this after receiving more endorsements from the national leader of the party, Bola Tinubu, as well as governors elected on the platform of the party ahead of the national convention of the party.

Oshiomhole while speaking at the event in honour of late Chief MKO Abiola’s family chaired by Femi Falana, Oshiomhole also praised Chief Frank Kokori for standing up to dictatorship when it mattered most.

“He should be arrested if he has committed any offence. He arrested many of us. So, if we are celebrating Chief Gani Fawehinmi, we have compelling reasons to do so. In all of these, we didn’t pay any money to Gani or Falana. They defended us pro bono.

Gani is not here today, but his spirit is here. Falana is here and today, I am standing. Even the president who was in charge then, he is now complaining that they want to harass him. He was harassing me and he got me arrested. He thought he himself would not be arrested? If I were the president I would arrest him. We are all Nigerians. I remember one day I told him, I said ‘President Obasanjo, we made you president. You did not make me a Nigerian.

You are our creation; I am not your creation. You must listen’. But he thought he would be in power forever and he tried to take us on the way to Zimbabwe. He was a reluctant Head of State, became president for two terms and he wanted to do a third term because a cockroach licking palm oil would never lick enough.”

Oshiomhole added that when he was accused by Obasanjo of behaving as if I was an alternate president; and he was running the NLC like a parallel government that wanted to overthrow his government.

Why Jailed Dariye’s Appeal For Mercy Was Rejected (Details)