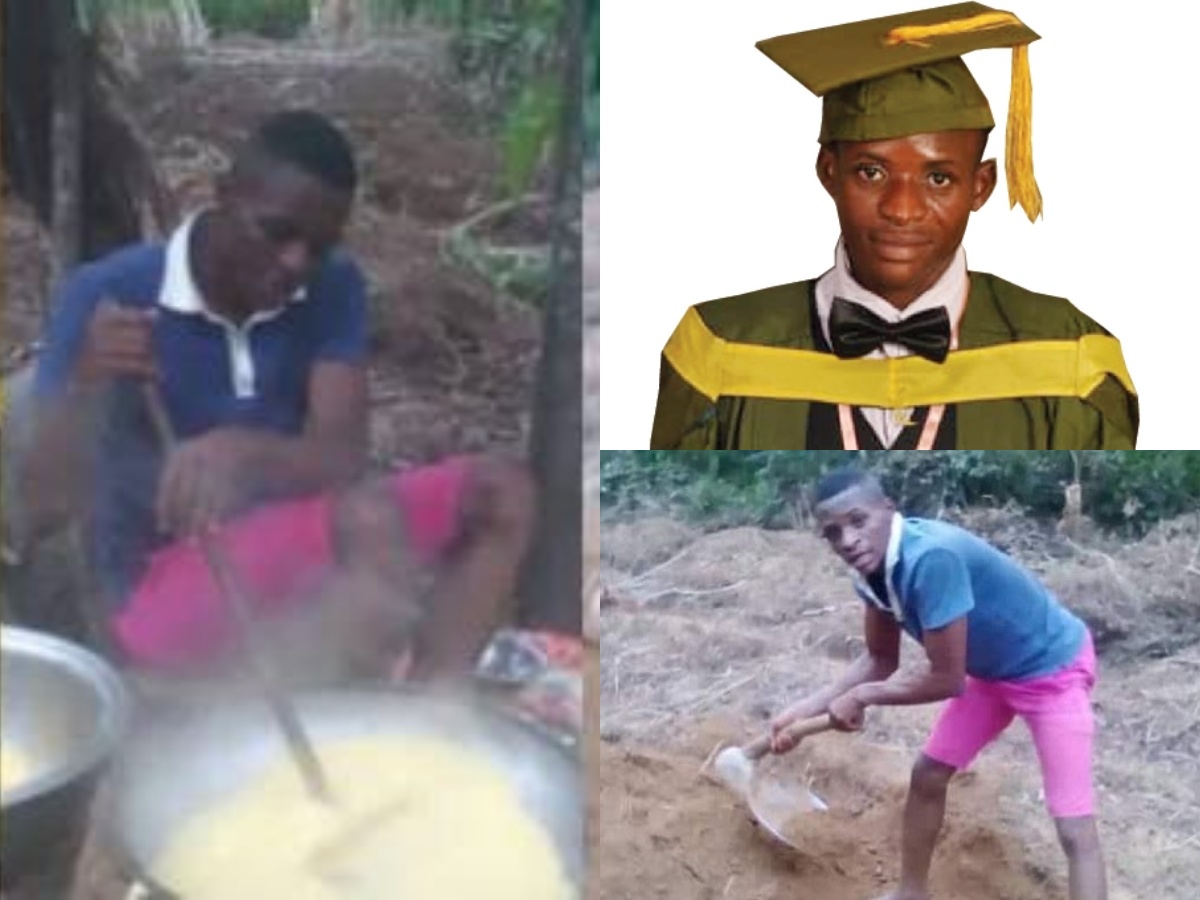 A destiny they say can only be delayed but can never be denied, so it was with Emmanuel Nworie, a first-class mathematics graduate of the University of Nigeria, Nsukka.

Naija News understands that Nworie while dreaming to one day become a mathematician lost his father to a health challenge in 2005, a development that made life so difficult for him.

However, the genius mathematician runs into luck by bagging a fully-funded scholarship at a university in the United States, days after a photo of him tilling the soil in Ebonyi state owing to poverty and a lack of a platform to utilize his knowledge went. viral on social media.

Recounting his ordeals before applying for the Michael Taiwo (MT) Scholarship in an interview with newsmen earlier, Nworie said: “I started having challenges in 2005 when we struggled with the health of my dad. I have long wanted to be a mathematician. But after my dad passed away, I was deterred because at some point when I was trying to save for undergraduate studies and after two years I couldn’t save enough, so I was frustrated.”

Nworie made the list of 23 candidates selected from 1,509 applicants for the scholarship, covering costs for application fees and the Graduate Record Exam (GRE) — a requirement for the graduate application for some courses in the US. Naija News understands that the graduate received three different offers from universities in the southern part of the US.

Announcing the development, Taiwo wrote: “Today, I am pleased to announce that Emmanuel Chinweuba Nworie has accepted a fully-funded offer to study for his PhD in Mathematics at the Southern Methodist University (SMU) in Dallas, Texas. SMU is a prestigious private research university. Emmanuel prefers locations with warm weather. He received three great offers, all from schools in the southern part of the US.

“Mentors are our secret sauce. It is hard to exaggerate the role Dr. Busayo Aworunse, Emmanuel’s assigned mentor, played in delivering the outcome we celebrate today. Busayo, thank you. Help me congratulate Emmanuel. I cannot wait to see what he does with a Math PhD from SMU!”

Applauding Nworie’s achievement in a recent interview with TheCable, Taiwo said: “He still feels the rage and sadness I spoke about a couple of months ago, but I feel happy for him in particular and hope in general that we can make a difference.

“He is going to one of the best universities in the world. SMU is a costly school, more expensive than Ivy League schools like Harvard and Yale. He will be schooling with people from the richest families in the world. This is the kind of exposure we (the MT Scholarship team) and he felt like he needed so that he can think big with his God-endowed brain.

“It costs over $75,000 per year to attend SMU. Emmanuel won’t pay a single dollar out of this. In addition to this, he will be given a very generous stipend to cater for his living expenses. The interesting thing is that he got three of this type of offers from Southern Methodist University, the University of Tennessee at Knoxville, and the University of Texas at Dallas.”

Sending his words of encouragement to other graduates with similar stories like Nworie, Taiwo said: “I would say they should keep up hope and try to move to a city where they can have access to the internet. As you can remember from Emmanuel’s story, his breakthrough came because he was in Enugu when the application window for the annual Michael Taiwo Graduate School Application scholarship was open.

“If he had been at his farm in Ebonyi, he would have missed this generation-changing opportunity. So my advice is that they should relocate to where they can get access to information, i.e. the internet.”

In another news, the Federal University Dutsin-Ma in Katsina State suspended one Peter Enajo and his friends, Lukman Aminu, Musa Halidu, and Maikosa Victor Lawal from school over alleged involvement in cultism, Naija News reports.