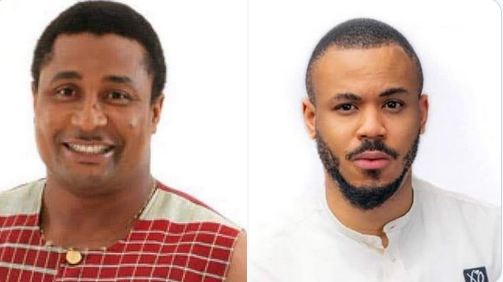 Nigerians have likened current Head of House, Ozo to Noll for begging Nengi after picking Dora as Deputy HOH over Nengi for week three of the ongoing BBNaija Lockdown edition.

Ozo became the HOH for the third week of the ongoing Big Brother season five after Nengi and Lucy emerge, winners of the previous Head of House games.

Ozo won the BBNaija HOH for the third week with no ties unlike the past two which saw Nengi and Lucy emerge winners respectively.

After winning the game, Ozo selected Dorathy as his Deputy HOH, a decision he believes didn’t go well with another BBNaija Housemate, Nengi, who he (Ozo) had said he is attracted to her but sees Dora as a friend.

Moments after Ozo picked Dora over Nengi, he was seen apologizing to Nengi for picking Dora over her, an action which Nigerians didn’t take likely as they took to the micro-blogging site, Twitter to give their opinions on the decision with the viewers describing him as Tony Umez.

When I see Ozo, I remember how Tony Umez will marry Chioma Chukwuka and still be keeping his side chick Eucharia till the sidechick put him inside bottle?

After years of bottlemanship, Chioma will now invite pastor to pray

Ozo’s village people about to Tony Umez him up and he’s falling into the trap . If he mistakenly blurbs out that “Nengi you were my other choice” he could get disqualified . #bbnaija

What does Ozo and Tony Umez have in common? Both of them will shatter your heart and then say, "Darling I can explain"???#BBOzo pic.twitter.com/ka51rsPlBt

Deputy HOH
Tony Umez
Tobi
What is Ozo.
All trending. This is from someone I thought was going to give me peace.

Dozo shippers will insult him but iam just happy that this whole thing is clear now. Nengi will most likely turn him down but such is life. We move. Priority is Ozo either way. Frodd, Tobi, Tony Umez, we accept it all #bbnaija pic.twitter.com/9wxMAxF3s8

This cannot be happening, what sort of Tony Umez behaviour is this one??? #BBNaijaLocdown pic.twitter.com/TJk8Ar9WZD