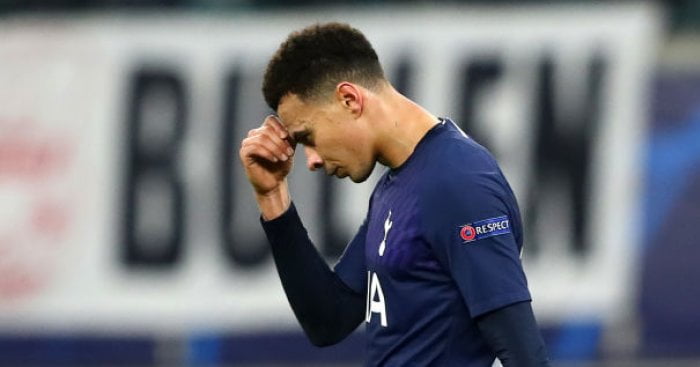 24-year-old England born professional footballer, Dele Alli has been ruled out of Tottenham’s clash with Manchester United in the English Premier League competition as the season restarts on June 17.

It was reported that the midfielder a few months ago laughed an Asian indigene on social media over COVID-19 pandemic.

Naija News understands that Ali in a video shared on the social media app, Snapchat precisely, made fun of a man about the novel virus which has brought countries of the world to their knee. The player, however, was called to order and asked to pay a fine of £50,000 and as well ordered to undertake a face-to-face education course following the breach of FA Rule E3.

The FA body’s decision has, however, ruled the player out from playing for his club in a clash against United come June 19.

Apologising for the FA law breach, Ali said, “In response to the FA decision, I would like to apologise again for any offence caused by my behaviour.”

“It was an extremely poorly judged joke about a virus that has now affected us more than we could ever have imagined. I’m grateful that The FA has confirmed that my actions were not racist because I despise racism of any kind.”

He added, “We all need to be mindful of the words and actions we use and how they can be perceived by others.”

Naija News learnt also that the Spurs star player has taken down the reported video and issued an apology for his actions. Coronavirus “isn’t something that should be joked about” and that he “let myself down and the club,” Ali noted.

Reacting to Ali’s offence, Spurs manager, Jose Mourinho noted that the last thing the player will do is to support racism. Mourinho defended Ali for showing “remarkable humility” he said.

“The last thing that Dele is, is anything connected with racism or disrespect,” Mourinho added.