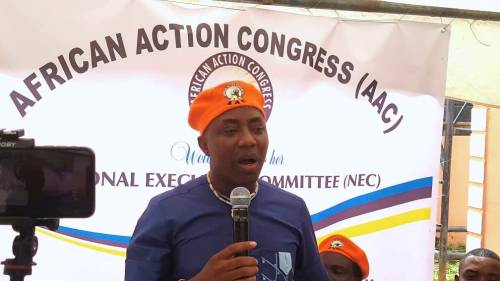 Human rights and constitutional lawyer Femi Falana (SAN) has vowed to challenge the continued detention of Omoyele Sowore by the Department of State Services (DSS).

A Federal High Court sitting in Abuja has granted the request by the Department of State Services (DSS) to further detain the convener of #RevolutionNow, Omoyele Sowore.

In the motion ex-parte brought by the DSS under Section 27(1) of the Terrorism (Prevention Amendment) Act, the agency accused Sowore of engaging in acts of terrorism.

Naija News understands that the Court on Thursday granted the secret Police the request to detain Sowore who is also the publisher of Sahara Reporters for 45 days pending the conclusion of its investigation.

The judgement was reached in a ruling by Justice Taiwo Taiwo on Thursday on an ex-parte motion by the DSS.

The DSS had applied for a 90-day order, but Justice Taiwo Taiwo exercised his discretion and slashed the period by half in the first instance, noting that it could be renewed upon an application.

Reacting to the ruling, Sowore’s counsel, Femi Falana said the SaharaReporters Publisher’s case provides an opportunity to test the constitutional validity of the 90-day detention period.

He said: “I met Mr Omoyele Sowore in detention yesterday (Wednesday). He is in high spirits. In anticipation of today’s (Thursday’s) ruling, he had instructed us to challenge the refusal of the SSS to charge him with the alleged offences of terrorism or treason within 24 hours of his arrest as stipulated by Section 35 of the Nigerian Constitution.

“More so, that some of those who participated in the Revolution Now protest in Lagos and Calabar have since been charged with unlawful assembly and breach of the peace!

“It is, however, pertinent to note that the Terrorism Prevention Act as amended which empowers a judge to order the detention of a citizen for a period of 90 days was not enacted under the Buhari regime. It was enacted by the national assembly in 2011 and amended in 2013. But it has never been invoked to justify the detention of placard-carrying protesters in any part of the country!

“We had convinced the authorities to repeal the obnoxious provision of the Act. Instead of acceding to our request the national assembly enacted the Administration of Criminal Justice Act, 2015 which permits a pre-trial detention period of 14 days subject to renewal.

“No doubt, the Sowore case provides an opportunity to test the constitutional validity of the 90-day detention period.

“Even under the worst military dictatorship in Nigeria, the maximum detention period was three months subject to renewal by the detaining authorities. Our situation should not be worse under a democratically elected government.”