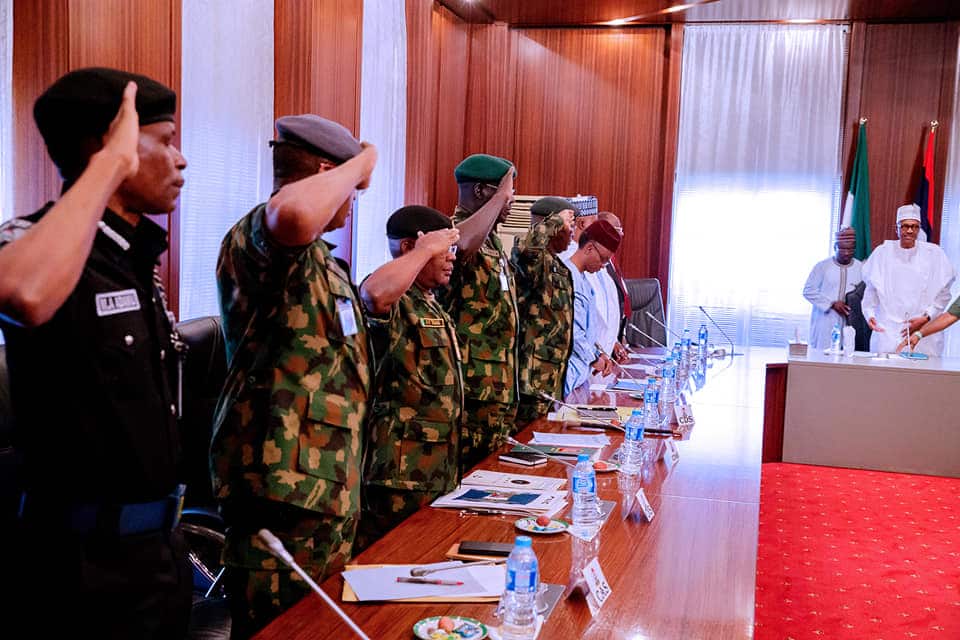 A pro-democratic group, National Democratic Front (NDF), on Wednesday subjected the Nigerian Governors’ Forum to fresh attack for allegedly suggesting the sack of Nigerian security chiefs over the matters of insecurity in some of the respective states they govern.

The Forum warned the Governors against looking for scapegoats to cover their alleged failures as Governors in ensuring maximum security within their respective states.

Naija news understands that the Forum alleged that the Governors failed to tackle the ranging security matters in their various states and warned them against blaming the Security Chiefs appointed by President Muhammadu Buhari for the insecurity in their states.

Naija News reports that the statement by the NDF claimed to have uncovered a plot by some state governors to exploit the recently released report of the Global Peace Index 2019 that saw Nigeria at number 148 of the countries of the world surveyed.

The NDF alleged that some state governors have resorted to exploiting the report to demand some changes in the nation’s security structure which include the immediate sack of the Nigerian Security Chiefs.

While addressing newsmen on Wednesday, June 19, the Secretary-General of the forum, Abdulkadir Bolaji, noted that the statement by the NDF became necessary after the move by some of the state Governors in the Nigerian Governors Forum to prevail on President Buhari to take “steps that may be inimical to national interest while being favourable to state governors,” the NDF said.

In the statement obtained by Naija News, the NDF, therefore, urged President Buhari to question the governors’ commitment to peace and security especially in their states and the country at large.

The NDF statement obtained by Naija News reads; “It is common knowledge that reports such as this usually are unable to factor in the most recent developments, like the progress a country has made in dealing with its security problems. But this briefing is not about the Global Peace Index 2019, which we shall address at a later date.

“The crux of the briefing is the surreptitious move by state governors under the Nigerian Governors Forum to prevail on President Muhammadu Buhari to take steps that may be inimical to national interest while being favourable to state governors.

“A key one among these questionable steps is a demand for a supposed overhaul of the security structure, citing instances and making excuses that have no bearing on the reality of addressing the complex security breaches that have been created in the land.

“We find it most uncharitable that the Governors Forum is now agitating to have the wrong solutions implemented to address the problem that its members were solely responsible for creating.

“This is why we are calling on the governors to stop being childish, accept what they have done wrong to cause the current security problems and adopt a holistic approach towards resolving the numerous security issues facing the country instead of playing to the gallery.

“Since the chief executives of the second tier of government appear to have suffered amnesia about how they caused the current set of problems in the land, it is necessary to refresh their minds for them to recollect how they serially raped the land to produce the present harvest of problems that appear resistant to known solutions.

“It is pertinent to remind our dear governors that the degeneration of the security situation of the country, in non-Boko Haram aspects, only worsened after the recent general elections, in which many of them without tangible projects and programmes to entice voters were desperate to win. It was this desperation that made them to take measures that are now haunting their respective states and the country at large.

“For instance, it was this desperation that made them to arm youths as political thugs with illicit weapons that have now been channeled towards kidnapping and banditry. Those in fringe states among them actively encouraged the inflow of aliens into Nigeria while subverting the ability of border communities to flag the entrance of hired mercenaries into the country. The alarm was previously raised by the federal government about how the opposition among these politicians hired mercenaries to cause security breaches in Nigeria.

“In terms of remote causes of insecurity in the land, it was these same governors that have been responsible for underdeveloping their states and impoverishing their population to a point where the risk of death from violent crimes no longer deter citizens that have practically snapped and crossed the point of no return. These same governors have become experts at squandering allocations meant for security vote, which they now in most cases disbursed to arm ethnic militias.

“It is nauseating that the same governors and their associates are now presssuing President Buhari to abandon his winning team so that they can be replaced with those that will allow terrorism and criminality to explode into ful time businesses for the urchins serving the interest of these same governors. This is why they have become obsessed with the symptoms instead of owning up to their own roles in these problems.

“Instead of scape-goating the heads of security agencies and military chiefs, our dear governors should rather open up to Mr. President about the things they did wrong to create whatever security breach currently prevails in their respective states. Such profound exposition of the crimes that have been committed against Nigeria will give indication on how to effectively tackle the current challenges.”