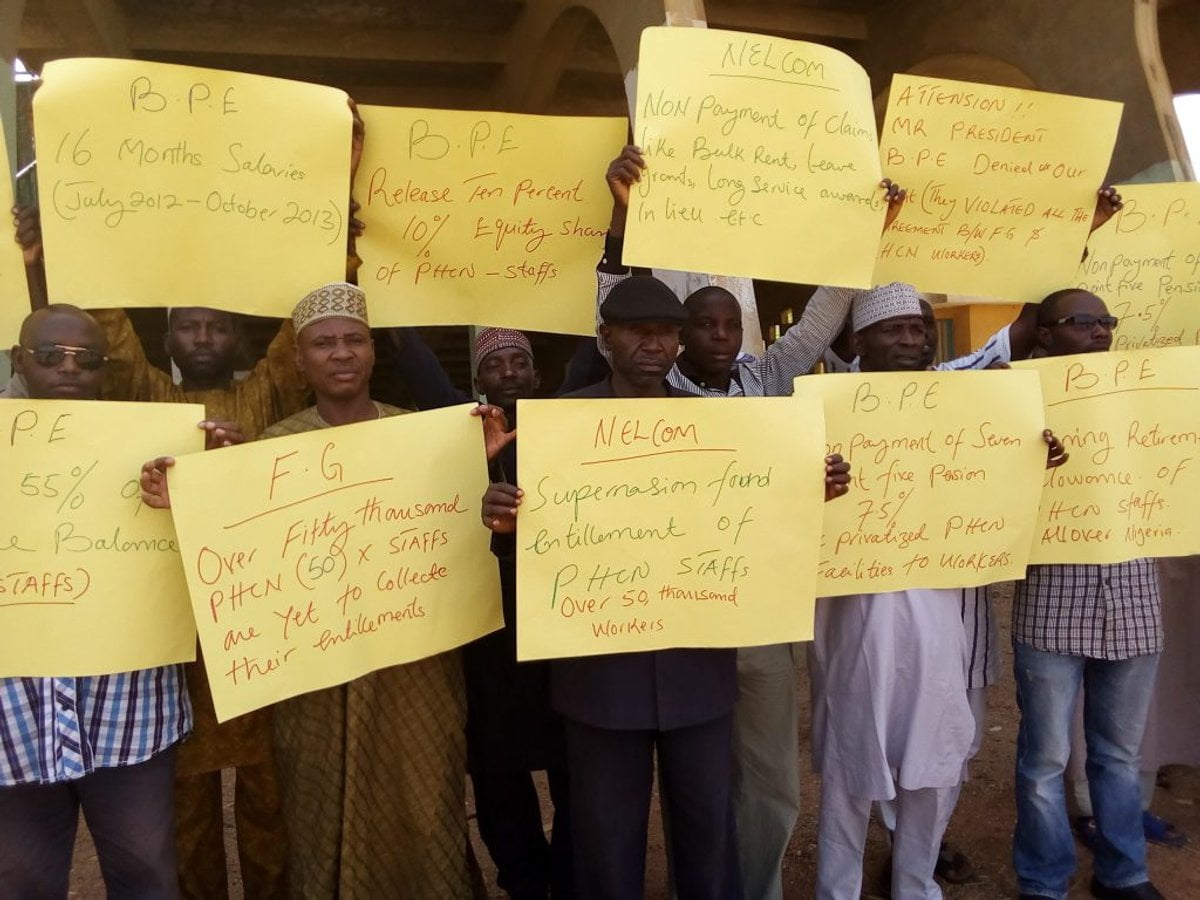 No fewer than 200 sacked workers of the Power Holding Company of Nigeria under the aegis of Association of Disengaged PHCN Staff Forum of Nigeria have protested in Bauchi State over the non-payment of their entitlements over five years after privatization.

The workers expressed their pains and sufferings to newsmen during a protest at the Multi-Purpose Hall, Bauchi state

Carrying placards without various inscriptions such as “Attention, Mr. President, BPE denied our plight (they violated all the agreements between FG and PHCN staff),” “BPE, Release 10% equity shares of PHCN staff” among others, the protesters besieged the PHCN building in the state.

Speaking on behalf of the aggrieved workers, the Vice President of the Association, Lawal Magini, lamented that more than five years after the privatization of the power sector in Nigeria, the sacked PHCN staff were yet to be paid their outstanding benefits despite series of agreements and promises reached with the government.

Others were nonpayment of 10% equity share allotted to disengaged PHCN staff after privatization, nonpayment of 16 months arrears as a result of a delay in handing over from July 2012 to October 2013, among many benefits.

Magini told newsmen that government’s failure to settle these outstanding benefits had caused them pains and untold hardships as a majority of them cannot feed their families stating that some of them collect less than N10, 000 as a pension.

Punch quoted him to have said,  “Due to the nonpayment of these entitlements, we are afflicted with untold hardships as a great number of us can no longer afford to feed our families, take our children to school nor can we afford their medical fees and other basic necessities of life. Life is continually becoming unbearable by the day.

“Those among us who have attended pension age receive only a meagre amount that is not near enough due to the nonpayment of the government pension component. Five years down the lane, many of us have died leaving behind helpless orphans and widows.”

Magini urged the federal government through its appropriate agencies, the Bureau for Public Enterprises and the Nigerian Electricity Liability Management Company, to ensure the immediate payment of severance package to the ex-PHCN staff that is yet to receive a dime despite calls and agitations on the matter.