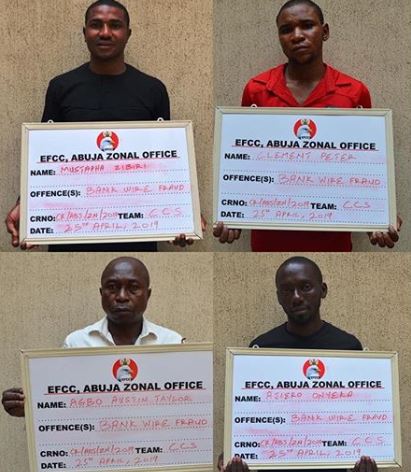 The Abuja Zonal Office of the Economic and Financial Crimes Commission (EFCC), on Thursday says it has arrested four suspects over a fraudulent Bank Wire Transfer to the tune of $200,000.

The team of the anti-graft agency clamped down on them while they were said to be about making the transfer of the said amount from the account of an unsuspecting foreigner into a domiciliary account in Nigeria.

The team got a tip-off of the plans of the suspects when they were sourcing for domiciliary account numbers which they will use to receive the monies.

Naija News was told that the fraudsters have an attitude of using people’s domiciliary accounts and promising them of a commission from the monies that would be credited into the account.

Similarly, the operatives of the Oyo state EFCC have earlier this week, apprehended about 32 internet fraudsters for several Internet-related scams in the state.

The fraudsters were apprehended at various strategic positions in their homes in Abeokuta, Ogun state.

On the arrival of the EFCC officials, the suspected internet scammers ran into hiding while the intelligent EFCC officers succeeded in smoking them out of their chair and other places they had gone to hide.