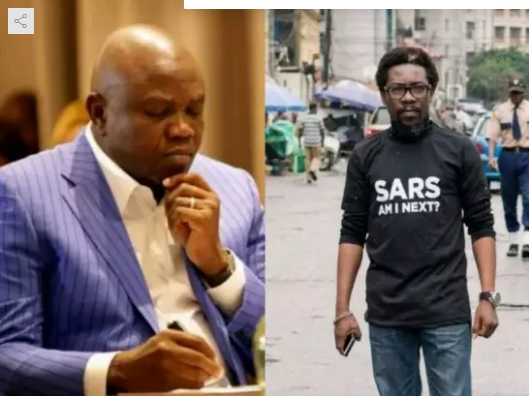 Nigerian realtor, media marketing consultant and Human right activist, Segun Awosanya, popularly known as Segalink again lambasted the governor of Lagos state, Akinwunmi Ambode for being silent despite the killings of Lagosians by some ‘overzealous and trigger-happy police officers.’

Naija News reports that the #EndSARS convener called out the governor of the state for not uttering a word to condemn the activities of the killers.

Segalink in a Tweet on Tuesday described Ambode’s silence over the killings as “Irresponsible.”

In his tweet, Segalink said; “I don’t even know Lagos State still has a Governor until I saw this at the IGP’s Address. The irresponsibility is so loud. Citizens in your state are being decimated by your own police and you said nothing? If there be any shame in him he should have sent a representative. #Shame.”

Segalink’s reaction comes after a series of reactions from several Nigerians condemning the attacks by the uniform men against innocent citizens.

Just recently, Omotola Jolade while reacting to the killings, blamed the President Muhammadu Buhari-led administration for being responsible for the killings in some parts of the country.

Similarly, the Senator representing Kaduna Central in the National Assembly, Shehu Sani has thrown his weight behind Omotola to reacted to the comment by the actress that Nigeria has become ‘hellish’ in President Muhammadu Buhari’s administration.