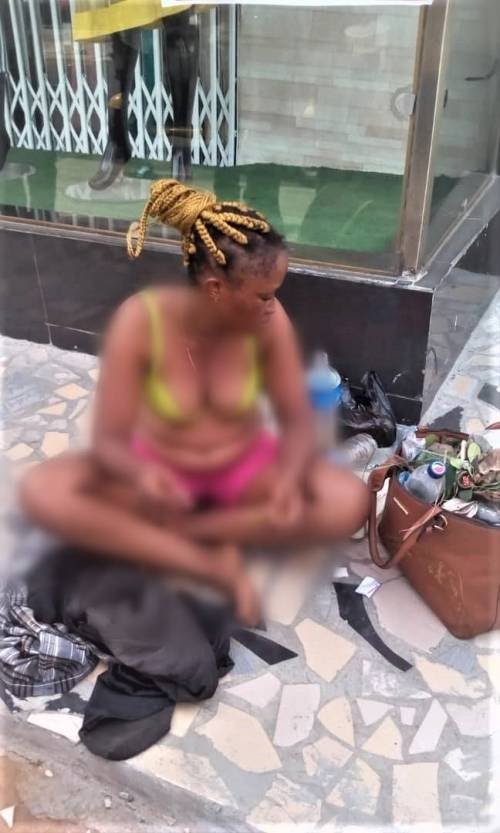 An unidentified middle-aged female student, suspected to be a slay queen has during the early hours of Saturday reportedly stripped herself of her clothes and other valuables in the public.

Naija News reports that the lady is said to be a student of the Nasarawa State Polytechnic, where she had secured an admission to pursue a five years programme in the institute.

An eyewitness (name withheld) revealed that the slay queen was from the country club in the GRA in Lagos, Nigeria’s commercial city.

While the eyewitness was speaking, she said in one of her Instagram posts as thus; “Nobody suspected anything at first as she was merely just loafing about,” said one witness.

“However, as she walked down Joel Ogunnaike Street, she started dancing. Then she went to the refuse bin and started picking stuff from there and putting them into her bag. “At that point, a few of us started approaching her to see if all was well with her. The next thing we saw was that she started removing her clothes, beginning with her trousers. And that’s when we knew all was not well and we immediately surrounded her.

“Someone laid hands on her and started praying for her and she calmed down and we encouraged her to put on her clothes. We asked her a few questions, which she attempted to answer, but after a few minutes, it seemed she was starting to lose it again. So, we took her phone, which wasn’t locked, and went through it; one of us called the number identified as that of her brother.

“From what I gathered after the call was made, it was confirmed that she is a student of a polytechnic in Nasarawa

“He (the brother) also said we should please make sure she doesn’t get lost as he would start his journey to Lagos immediately.

“Afterwards, she was taken to a Police Station by some people,”  the eyewitness recounted.