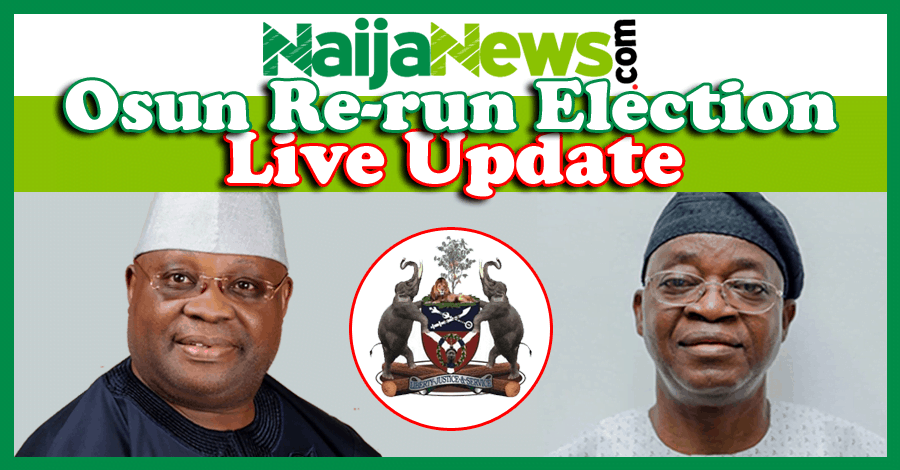 The Osun state governorship election conducted on Saturday, 22 September was declared inconclusive, a re-run election has been slated for today in seven wards in Osun state.

In the inconclusive election, PDP candidate, Ademola Adeleke, led the race with 254,698 votes, 353 votes more than his closest rival, Gboyega Oyetola of the APC.

The re-run will be taking place today in seven poling units across  Osogbo, Orolu, Ife North and Ife south.

Naija News understands  the seven affected polling units have 3498 votes which will eventually determine the winner of the election on Thursday.

Naija News is on ground to give you live updates all through the election.

keep refreshing this page for the latest updates.

2:00 PM: INEC said all the issues of the reported denial of Journalists’ and observers’ access to polling units have been resolved.

1.05 PM: Shegun Awoyemi, an agent of the PRP has been arrested at Polling unit 17, Ward 5. A foreign observer called the attention of the security agents to him.

The foreign obaserver said he has been observing him since. He said whenever the voters finish casting their votes they will go and meet him.

He, therefore, asked the security officer to search him and a total amount of N21, 140 was found in his inner pocket. He has just been taken away.

12:50 PM: At Ward 5, Unit 17 in Osogbo, Voting almost completed in at the rerun poling unit in Osogbo as only 25 persons were still left on the queue.

A man has been accused of voting buying. He was arrested by security operatives who found about N20,600 cash in the pocket of his inner jeans shor.

11:51 AM: Some supected hoodlums are shooting sporadically in Osogbo. The security agents are trying to repel them.

11:41 AM: Voters in Orolu LG are reportedly protesting after their PVCs were seized by gun-wielding thugs and they were sent away.
At Kajola Community Primary School, where Ward 8, Unit 1 is located, not less than 50 suspected thugs are allegedly providing security for INEC officials.

11:40 AM: Election is going on smoothly at Unit 17, Ward 5 in Osogbo. Electorate are being civil, waiting patiently to exercise their franchise. Queue has been reduced. Our reporter gathered that voting may soon come to an end.

10:30 AM: INEC says it is disturbed about reports that accredited media and observers are being arrested or prevented from operating in some polling units. This is being taken up with the security agencies, the electoral umpire assures.

10:22 AM: Observers restricted from gaining access to polling units in Orolu LGA:

Many observers have complained of being denied access to Ifon polling units in Orolu LGA by security operatives.

Rukayat Ahmodu, an observer for CLEEN foundation was turned back by police and other security agencies from entering Orolu.

“We got there at 6:30am, they took us to the police station and later brought us to a junction. They said we are not allowed inside the centres,” Ms Ahmodu said.

Voters drenched as they cue and Vote under heavy downpour in A polling unit at Ife South LGA.

10:03 AM:  Despite the heavy rainfall, voters remain on queue at Ife South LGA to cast their votes.

9:55 AM: Voters have now returned to their queues as they rains have subsided and voting has commenced in the affected poling units.

9:26 AM: A party agent raised concerns about a voter registered in another polling unit moving forward to cast his vote at Olode Ward 07, PU12, Adereti in Ife-south LG.

The INEC officer checked the potential voter’s PVC and ordered him out of the polling unit.

Rukayat Ahmodu , an observer for CLEEN foundation sent back by police and other security agencies from entering Orolu. She arrived at Osogbo after failing to gain access to Orolu. Sh said, “we got there at 6.30am. They took us to the police station and returned us to the junction, and never allowed observers in.”

Rukiyat Ahmodu, an observer for CLEEN foundation denied access to polling units in Orolu LGA as at 9:30am.

9:10 AM: Rainfall forces voters to run away from the queue and seek shelter in nearby buildings.

8: 58 AM: At Orolu LGA Security operatives restrict an election observer from getting to a polling unit in the LGA.

8:50 AM: Election observers arrive and speak on what they have observed so far in the Osun governorship re-run.

8:42 AM: Signs of vote buying At Olode Ward 07, PU12, in Ife-South LGA Mr Adereti, an INEC officer denied an observer movement around the polling unit where vote-buying is suspectedly going on.

8:09 AM:  At PU 17, Ward 5 Osogbo, Aged people are given preference however, voting cubicle is not secluded to ensure voter secrecy as INEC promised.

7.52 AM: – Confusion erupts at  as voters from other poling units try to vote.

Some party agents protest. The police order the holder to vacate the area. Calm returns. The queue is long.

7.52 AM: There is unease at PU 17, Ward 5 Osogbo over presence of Unit 03 PVC held by a potential voter. Some agents protest and police order the holder to vacate the area. Calm returns. The queue is long.

7.45 AM– Electoral officers have set up the the voting logistics at PU 17 Ward 5 in Osogbo. The electorate are waiting to commence the voting process by 8 am, the official time.

7:15 AM: There is tension in Ifon, Orolu LGA as residents gather in tens and hundreds discussing, a report by Premium Times states.

It was alleged that about twelve vehicles carrying thugs working for one of the parties drove ahead.

Observers, residents and other interested parties are waiting for security reinforcement to proceed to polling units.