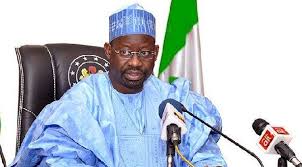 The governor of Gombe State, Hassan Dankwambo, has made his intention to vie for the seat of the president on the platform of the People Democratic Party (PDP) official.

The governor made this development known in a tweet on Saturday.

“After wide consultations with party members & Nigerians of diverse backgrounds! I, Dr Ibrahim Hassan Dankwambo will be running for office of the President of the Federal Republic of Nigeria under the platform of our great party, the Peoples Democratic Party. #GoingBeyondPromises”, he said.

Dankwambo would be joining other four aspirant jostling for the ticket of the president on the platform of the PDP; they include former vice-president Atiku Abubakar, who only two weeks went to Gombe to solicit Dankwambo’s support, Senator Ahmed Makarfi, a former governor of Kaduna and chairman of the PDP, Alhaji Sule Lamido, former governor of Jigawa, Attahiru Bafarawa, former governor of Sokoto and Tanimu Turaki, a former minister of the Jonathan era, who has launched a campaign via billboards.

This is excluding other possible candidates such as Senator Rabiu Kwankwaso, Senator Bukola Saraki and Governor Aminu Tambuwal of Sokoto. They are yet to make their plans known, officially.

The governor also added that Nigeria’s next president ought to come from the North East.

He made this known while speaking at a meeting with PDP officials the North East geo-political zone.

He added that the most qualified candidates who express their interest from the Zone should be presented as the flag-bearer of the party.

Speaking on the recent defection of top ranking members of the All Progressives Congress to the PDP, Dankwambo described the move as a reflection of the fact that the PDP has been reformed and repositioned, and urged existing members to welcome the new ones.

“All defectors should be accepted with an open heart and be given an equal opportunity as others who have been in the party”.