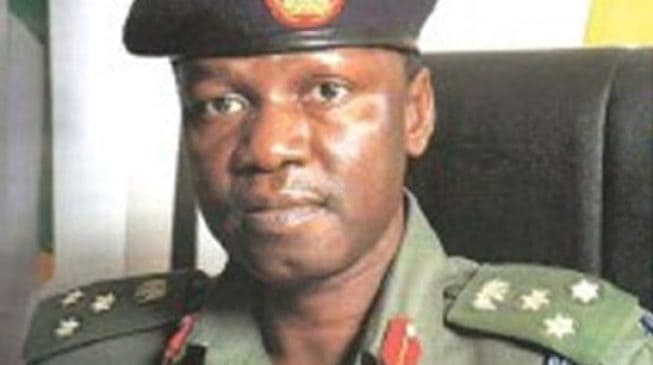 Top officials of the National Youth Service Corps (NYSC) are reportedly scheming to help Kemi Adeosun, minister of finance, out of her certificateScandal, TheCable reports.

Having finished her first degree at 22, she was not entitled to exemption on the ground of age except she was above 30, according to the NYSC Act.

She would also not be qualified for employment in either private or public sector having not served or been exempted.

TheCable learnt from NYSC insiders on Tuesday that the officials are looking for a way to help her out by blaming the mess on the former director-general, Yusuf Bomoi (pictured), a retired brigadier-general who died on September 18, 2017.

Adeosun’s “exemption” certificate is dated September 9, 2009 and bears the signature of Bomoi — even though he had officially left NYSC on February 13, 2009 when he was replaced by Maharazu Tsiga, also a brigadier-general.

TheCable was informed that Bomoi would be portrayed as having granted Adeosun the exemption “in error”.

“At least Bomoi is not alive to defend himself,” one of the officials said.

The misalignment in date, which shows the certificate being issued almost seven months after Bomoi had left his position, will be blamed on “clerical error”.

While this may potentially free Adeosun of the criminal charge of forgery, it still does not protect her from facing charges of dodging national service.

On Monday, NYSC issued a vague press release, confirming that Adeosun applied for exemption but failing to disclose when she applied and if she was indeed granted.

The body promised to investigate the “purported certificate” without confirming or denying the validity of the serial number or the genuineness of the document — even though insiders say it will not take “less than 30 minutes” to check the records.

“She is definitely not entitled to an exemption,” an official of NYSC, who declined being named for fear of victimisation, said.

“If indeed she applied officially, the response would have been standard — sorry, you are not entitled to exemption. You would have noticed that the NYSC press statement merely said she applied, which suggests that they have checked the records, and then it is silent on the other details. The officials are still working out a response. A lot is going on underground.”

Adeosun is yet to comment publicly on the mess.

WHAT DOES THE LAW SAY ON EXEMPTION?

Section 2 of the NYSC Act says: “Notwithstanding the provisions of subsection (1) of this section, with effect from 1st August, 1985, a person shall not be called upon to serve in the service corps if; at the date of his graduation or obtaining his diploma or other professional qualification –

Adeosun graduated from the Polytechnic of East London in 1989 at 22 and returned to Nigeria after she clocked 30.

She has worked in reputable private sector firms and also served as commissioner in Ogun state.