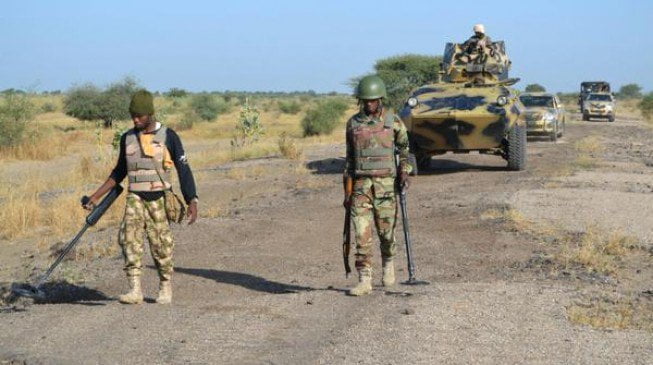 The Nigerian Army have reported that its troops have killed 15 Boko Haram fighters and rescued 49 women and children in Borno state.

Col. Onyeama noted that some of the insurgents were killed in the Lake Chad Island while others were neutralised in villages in Northern Borno on Tuesday.

“Troops dislodged the insurgents from their hideout after a fierce battle, killing 11 insurgents in Gomaran village of Southern Lake Chad Basin”, he said.

He explained that the troops also ambushed and killed four terrorists who were escaping from the military onslaught in Northern Borno.

Nwachukwu said that the troops further engaged fleeing insurgents in Firgi and Moula, both in Bama and Dikwa council.

“The clearance operations also led to the recovery of one Single Barrel Gun, one Dane gun and one locally made pistol.

“Additionally, the troops captured 2 Boko Haram flags, a pair of Camouflage uniform, a pair of combat boots, a Camera, a bag of mechanical tools and medications.

“Four men, 33 women and 16 children were rescued by the troops from the insurgents’ hideouts .

“The rescued hostages are currently being profiled for subsequent hand over to officials of the Internally Displaced Persons Camp for documentation and administering”, Nwachukwu said.