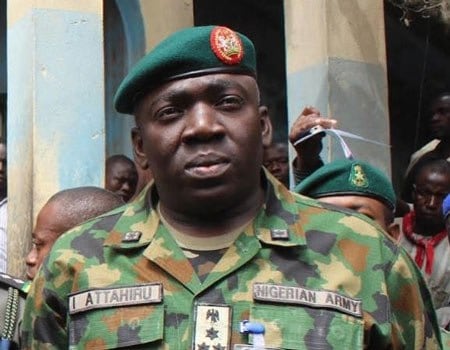 The Nigerian Army has removed Attahiru Ibrahim as the Theatre Commander of Operation Lafiya Dole, the counter-insurgency operation fighting Boko Haram in the North East.

The military radio in Borno made the announcements on Wednesday.

Ibrahim’s removal follows a series of brazen attacks by the insurgents in Borno and Adamawa states that have led to the death of many soldiers and civilians.

After taking over from Lucky Irabor in May, Ibrahim was expected to consolidate on the gains already made in the counter-insurgency operation. But it appear the reverse has been the case.

Under Ibrahim’s leadership, the operation failed to meet the 40-day deadline issued by Tukur Buratai, Chief of Army Staff, in July, for the capture of Abubakar Shekau, leader of Boko Haram.

Instead Shekau’s capture, the insurgents attacked the NNPC team exploring for oil at the Lake Chad Basin, killing almost 50 persons and kidnapping three members of the team who were lecturers in the Geography Department of the University of Maiduguri.

Also, some police women were captured by Boko Haram fighters after an attack on a convoy they were travelling in.

Just three days ago, a suicide bomber attacked Biu, a town in Borno State, killing at least 18 persons and injuring 52 others.

Also, 15 soldiers, including a commander, were killed in November when Boko Haram insurgents attacked troops’ location in Sassawa village, near Damaturu, the Yobe State capital,.

Over 50 persons were killed in an early-morning attack on Muslim worshippers in Yola Adamawa State in November after a suicide bomber managed to sneak into the mosque.

Though there were reports of raids on Boko Haram hideouts and the arrest and killing of some terrorists, more than 50 soldiers, including officers, were killed between May and December.

Rogers Nicholas, a Major-General, has been announced as Ibrahim’s replacement.