Unless Corrupt Leaders Are Arrested And Jailed, Anti-Corruption War Won’t Be Won In Africa – Soyinka

Nobel laureate, Professor Wole Soyinka has once again called on Nigeria’s  anti-graft agency, the EFCC to go after corrupt officials in high places as anti-graft agencies in Africa meet on how to recover stolen loot by corrupt leaders.

Professor Soyinka who gave the warning at the opening of a four-day conference of heads of anti-corruption agencies from across Africa in Abuja said that that he paid a visit to the EFCC headquarters in order to get a first-hand experience of the plans the anti-graft agency had for corrupt leaders.

“I took the trouble yesterday to visit the headquarters of EFCC. I wanted to see what would be the mode of hospitality for some of our leaders who will surely, sooner or later, pass through the doors of that beautiful (EFCC) building not far from here,” he said.

“I am not a vengeful person, but I think that until we make sure that some of our leaders pass through those doors, this struggle against corruption in this country will not be won.” 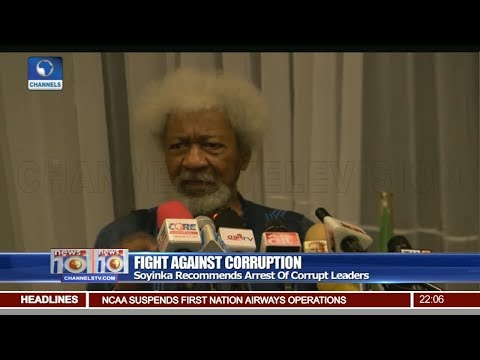 He also advises corrupt leaders to prepare for a change in lifestyle when they leave office and justice catches up with them.

The vice president Yemi Osinbajo who was also  at the opening ceremony of the four-day conference of heads of anti-corruption agencies from across Africa in Abuja said African leaders have to collaborate to tackle corruption, ensure the recovery and return of stolen assets.

“It is only through collective action that we can stay ahead of the criminal elements who rob our countries and citizens of their present and their future,” he said.

“African countries must come together to keep the issue of asset recovery and return on the front burner of international discuss.” 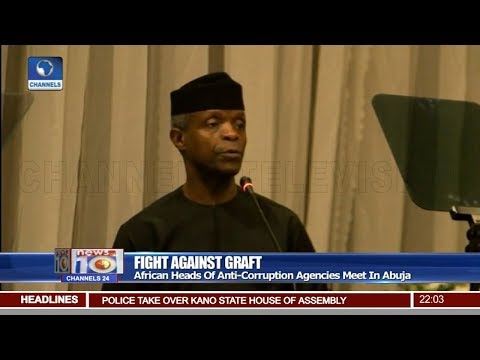 Other notable dignitries at the conference are three former Presidents – General Yakubu Gowon, General Abdulsalami Abubakar and Thabo Mbeki of South Africa – as well as the Chief Justice Of Nigeria, Justice Walter Onnoghen and the Secretary-General of the Commonwealth, Patricia Scotland.

Heads of anti-corruption agencies of countries that are members of the Commonwealth, including the Acting Chairman of the Economic and Financial Crimes Commission, Mr Ibrahim Magu, were also in attendance at the conference, which is the eighth in the series.

The Commonwealth Secretary-General in her speech, described the scale of the problem as a ravenous storm.

“The difference between the money we need to deliver the hopes and aspirations contained in our Commonwealth Charter of 2013 and the commitment we all made when we signed up to the UN SDGs of 2015 and the money we have is the sum equivalent of that which is siphoned off by the corrupt practices of the greedy, the uncaring and the pernicious few,” she said.