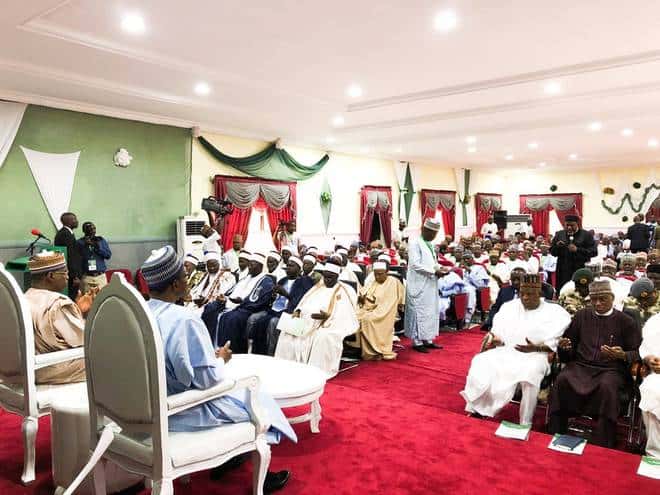 President Muhammadu Buhari has said that the his administration’s response to the February 19 abduction of 110 students of Government Girls’ Science and Technical College, Dapchi, Yobe State was far better, compared to that of the Goodluck Jonathan‘s administration during similar abduction in Chibok Borno State in 2014.

Punch reports that Buhari said these at a town hall meeting with traditional/community leaders and other stakeholders in Damaturu, Yobe State as part of activities lined up for his official visit to the state

He stated that the Federal Government swung into action immediately the Dapchi girls were confirmed to be taken captive. He added that the effort by his administration to secure the release of about hundred Chibok girls who were taken captive by Boko Haram under his predecessor’s administration showed that his government is committed to it promises to the Nigerian People.

Buhari said, “The Federal Government’s response to the unfortunate abduction of the school girls is a clear departure from the insensitivity of the past administration which looked the other way while the Chibok girls were taken away in 2014 and held in captivity for over three years.

“Due to our commitment, over 100 Chibok girls have been rescued and reunited with their families, sent back to school and empowered with requisite skills.

“You may recall that recently, our negotiation efforts led to the release of abducted University of Maiduguri lecturers, some women police personnel, students and even an NYSC member.

“We, therefore, have no doubt that the Dapchi girls will be rescued or released. I can reassure parents, Nigerians and the International Community that we will do all that is within our power to make sure that the girls are brought back safely to their families.”
Naija News, earlier today, brought to your notice the fact that the President visits Yobe State, where he had an interactive section with the stakeholders of the state concerning the Security Situation of the state.
READ ALSO  We Tried To Stop Mass Defection To No Avail - Buhari