President Muhammadu Buhari has directed all members of his cabinet running for elective offices to resign on or before Monday, April 16.

The Minister of Information and Culture, Lai Mohammed, made this known while addressing State House correspondents at the end of the Federal Executive Council (FEC) meeting.

Mohammed said President Buhari gave the directive in his address to the ministers and other cabinet members during the FEC meeting on Wednesday.

He disclosed that the only person not affected by the directive is the Vice President, Yemi Osinbajo who is an elected member of the cabinet.

Naija News reports that Buhari’s directive comes hours after the Court of Appeal set aside the judgment of the Federal High Court in Umuahia which voided the provision of Section 84(12) of the Electoral Act 2022.

Following the President’s directive, below is the list of ministers affected.

The Minister of Justice and Attorney-General of the Federation (AGF), Abubakar Malami, joined the race for the Kebbi State governorship seat in 2023.

Malami declared his intention to take over from Governor Atiku Bagudu of Kebbi at the presidential hall in Birnin-Kebbi on April 28.

According to Malami, he joined the race in response to calls from his people to serve the state as their next governor. 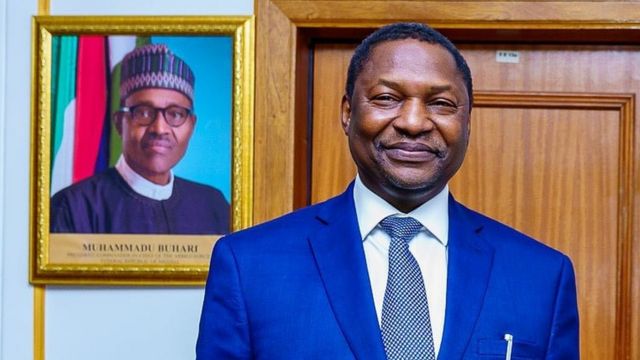 The Minister of Transportation, Chibuike Rotimi Amaechi, obtained the N100 million All Progressives Congress (APC) presidential expression of interest and nomination forms on May 5.

In a post via his Twitter handle, Amaechi, who is a former Governor of Rivers State, said his friends and associates bought the presidential forms for him.

The Minister of Niger Delta Affairs, Godswill Akpabio, declared his intention to take over from President Muhammadu Buhari at the end of his tenure.

The two-time former governor of Akwa Ibom made the declaration at Ikot Ekpene town in the South-South state on May 5.

Naija News reports that Akpabio has also obtained the presidential expression of interest and nomination forms of the APC.

Nigeria’s Minister of Labour and Employment, Dr Chris Ngige, formally made public his intention to contest the Presidency in the 2023 general election.

Naija News reports that the minister has also obtained the presidential expression of interest and nomination forms of the APC.

The Minister of Science, Technology and Innovations, Ogbonnaya Onu has declared his intention to contest the 2023 presidential election on the platform of the All Progressives Congress.

Onu, while declaring his intention at an event in Abuja on May 6, described himself as a “man of great compassion”, adding that he provided free treatment in public hospitals as a Governor of Abia State.

It is understood that the minister is yet to obtain the presidential expression of interest and nomination forms of the APC.

The Minister of State for Education, Chukwuemeka Nwajiuba, formally made known his intention to contest the 2023 presidential election.

Nwajiuba obtained the APC Nomination and Expression of Interest forms valued at N100m at the International Conference Center (ICC) in Abuja on April 27.

The minister disclosed that a support group, known as Project Nigeria, sourced the funds for him to purchase the forms.

The Minister of State for Mines and Steel Development, Uche Sampson Ogah, formally declared his intention to run for governorship in 2023.

Ogah made his intention to run for the Abia governorship race in 2023 known at his country home in Onuaku Uturu in Isiukwato Local Government Area of the state on April 13.

Naija News reports that the minister has also obtained the presidential expression of interest and nomination forms of the APC.

The Minister of Women Affairs and Social Development, Dame Pauline Tallen, has declared her 2023 Senatorial ambition.

Tallen announced his intention to contest for the Plateau South Senatorial seat in the 2023 general elections on May 8.

It is understood that the minister is yet to obtain the presidential expression of interest and nomination forms of the APC.

Editor’s note: This list will be updated as more ministers declare their political ambitions and their plans for Nigerians ahead of the 2023 elections.