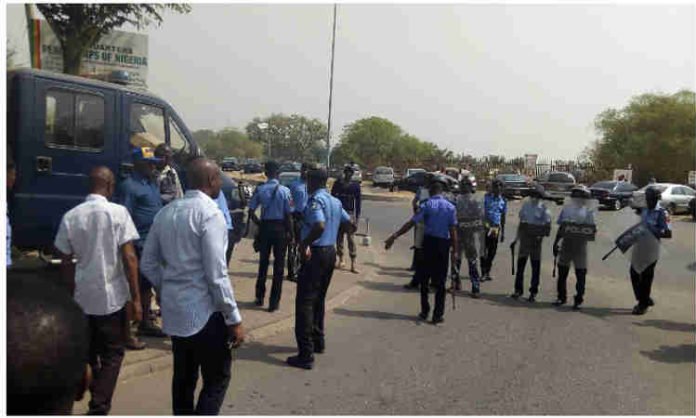 The Police have confirmed that gunmen executed a fresh attack, burnt down another police station on Tuesday in Imo State.

According to the Police spokesman in Imo State, SP Orlando Ikeokwu who confirmed the incident, the attackers burnt down the Ehime/Mbano police station and razed several vehicles as well.

He however added that no life was lost in the incident.

Confirming the latest attack, Orlando told NAN: “Yes I can confirm to you that the police facility was attacked today by bandits. No casualty on the part of police, no loss of arms but three vehicles were burnt in the process.”

The latest attack comes barely 48 hours after the Imo State Police Command confirmed the attack on its headquarters and the Owerri Correctional Prison in the early hours of Monday, April 5, 2021.

Naija News had reported how gunmen freed over 1500 inmates during an attack on the correctional facility and burnt vehicles parked inside the command headquarters in Owerri, the state capital.

It was gathered that the gunmen operated from 1am till 3am and freed the suspects in almost all the cells at the State Criminal Investigation Department of the command.

In other news, a combined team of Nigerian security operatives on Tuesday engaged suspected members of the Eastern Security Network (ESN), a security arm of IPOB, in a gun battle in Essien Udim LGA Akwa Ibom.

It was gathered that residents in the LGA reported that attack helicopters were seen hovering round their locations in obvious search of the ESN operatives.

A resident told SaharaReporters that the gunshots have been continuous, adding that residents had not been able to go about their normal business since morning.