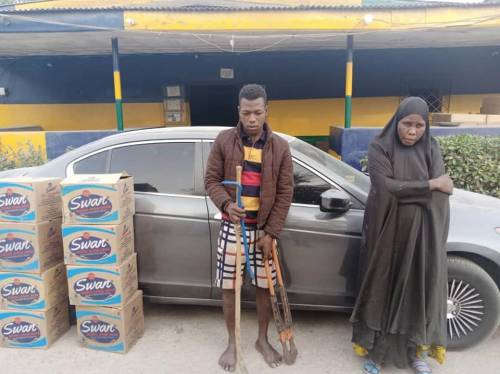 Kano State Police Command has disclosed that it has arrested a notorious criminal syndicate led by a 47-year-old ex-convict, Hauwa Mustapha.

The spokesman of the command, Abdullahi Haruna, while speaking on the development noted that the suspect specializes in car snatching and shop breaking.

Haruna said, “On the 19/01/2021 at about 0330hrs, a team of Operation Puff Adder led CSP Alabi Lateef, while on intelligence-led patrol along with Zaria Road Kano, arrested one Hauwa Mustapha, ‘f’, 47 years old, of Naibawa Quarters, Kano and one Auwalu Ibrahim, ‘m’, 28 years, of Brigade Quarters Kano, while driving a Motor Vehicle Honda Accord, Ash in colour, moving suspiciously.

Meanwhile, suspected herdsmen have slaughtered a farmer identified as Dele Olowoniyi, while asleep in a farm settlement at Oha village, Imeko, in Imeko-Afon Local Government Area of Ogun State.

It was gathered that the deceased was discovered by his wife with machete cuts in his neck and other parts of the body on Sunday.