Nigeria has been ranked as the third most terrorized country in the world according to a fresh (2020) report by the Global Terrorism Index (GTI).

The report which was released on Wednesday, ranked Nigeria third only behind war-torn countries of Afghanistan and Iraq.

According to the GTI report, Nigeria witnessed an increase in Boko Haram attacks in the period under review, witnessing her worst terrorist attack in 2019 in northeastern Borno State, where at least 70 people were killed and 10 others wounded when insurgents attacked at a funeral.

However, the report recognized that terror-related incidents in the West African nation fell by 27% in the same period due to a significant reduction in violence attributed to killer herdsmen.

“Despite an overall decline in terrorism, Boko Haram, Nigeria’s deadliest terrorist group, recorded an increase in terrorist activity mainly targeted at civilians. Terror-related deaths and incidents attributed to Boko Haram in Nigeria increased by 25 and 30% respectively from the prior year.

“In 2019, Boko Haram carried out 11 suicide bombings causing 68 fatalities. Suicide bombings accounted for 6% of all terror-related incidents by Boko Haram in 2019, marking an 89% decline from their peak in 2017,” the report read. 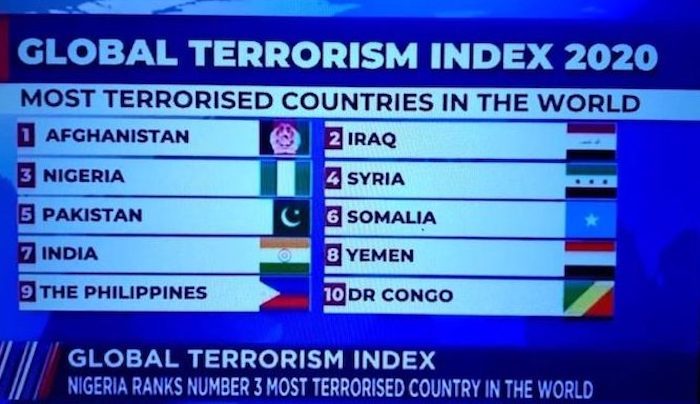 Meanwhile, leader of the Boko Haram Terrorist group, Abubakar Shekau has disclosed that the Nigerian Military can’t arrest or kill him because he is doing God’s work.

According to Shekau in a new video released after military authorities freshly declared him wanted, he and his fighters can’t be arrested by the military and even if by chance they get arrested, it won’t end the war.