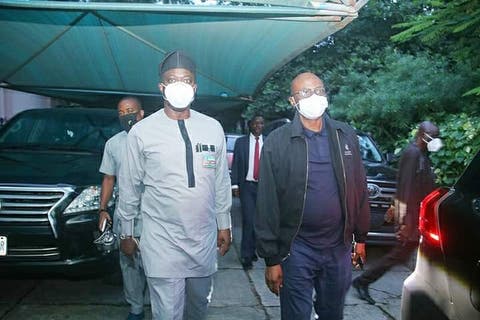 Naija News reports that this is the second time the duo will be meeting ahead of the October 10 Ondo governorship election draws near.

According to sources, Makinde visited Mimiko in his Ondo country home alongside two other leaders of the Peoples Democratic Party (PDP) in Oyo state including Senator Hosea Agboola.

The Oyo State governor visited Mimiko in a bid to woo him back to the PDP and forgive his ‘grandson’, the PDP governorship candidate, Eyitayo Jegede.

Jegede was Mimiko’s Attorney General and Justice Commissioner for eight years but their relationship became frosty after the 2016 election.

Makinde was said to have tried to mediate between the duo ahead of the election but failed, Vanguard reports.

Sources said that the first meeting between Makinde and Mimiko could not achieve the desired result because the former Ondo governor had given his word to the Ondo deputy governor, Agboola Ajayi, who was billed to defect to Mimiko’s Zenith Labour Party (ZLP) next week.

Mimiko was said to have informed Makinde that it was too late for him to support Jegede because of his commitment to the third force.

Naija News recalls that Jegede had visited Mimiko in Ondo during the week to seek for reconciliation and support for his ambition.