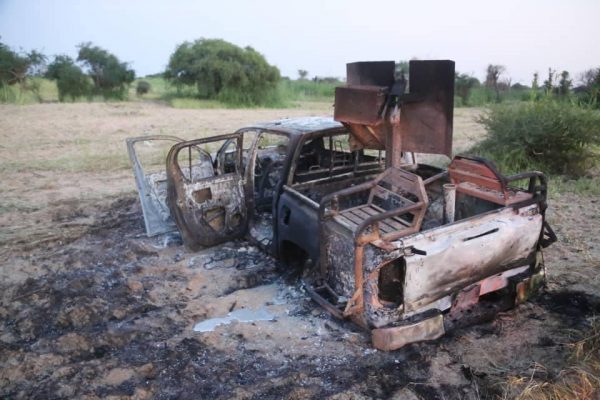 As part of the efforts to wipe out banditry, terrorism from the Nigerian soil, the Nigerian Air Force (NAF) has destroyed two ammunition–laden gun trucks in Northern Borno, belonging to the Islamic State West Africa Province (ISWAP).

Naija News reports that the NAF Director of Public Relations and Information, Air Commodore Ibikunle Daramola made this known in a statement on Wednesday, September 11 in Abuja, the Nigeria’s capital.

Daramola in his statement noted that the trucks were destroyed joint and intelligent effort of the Air Task Force (ATF) of the Operation Lafiya Dole.

He explained that the NAF’s Alpha Jet aircraft on reconnaissance mission along the Gudumbali-Zari-Garunda axis spotted the ISWAP gun trucks emerging from Jumaacheri settlement heading towards Garunda.

Daramola noted that “The attack aircraft tracked the two gun trucks as they attempted to evade detection by driving into foliage.

“The aircraft engaged one of the gun trucks which is camouflaged under a tree, in successive passes scoring accurate hits leading to the neutralisation of some of the ISWAP occupants.

“The gun truck was later seen engulfed in flames as a result of multiple mini-explosions of the on-board ammunition.

“The other gun truck was also tracked and immobilised after its occupants had abandoned it under another tree in the area,’’ he said.

Daramola reinstated the commitment of the Airwing of the Nigerian military in wiping out banditry, terrorism and its affiliates from the Nigerian soil.