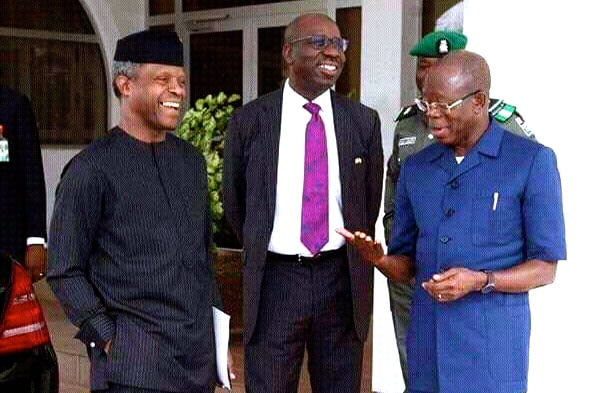 The All Progressives Congress (APC) has reacted to claims by Governor Godwin Obaseki that it’s National Chairman, Adams Oshiomhole, is biased towards the crisis rocking the Edo State House of Assembly.

Naija News reports that Obaseki had in a statement by his Media Adviser, Crusoe Osagie, accused Oshiomhole of not hearing from both sides in the Assembly crisis.

The ruling party had condemned the inauguration of nine members of the state House of Assembly at about 9.30 pm leaving out majority of members.

Reacting in a statement, the APC’s National Publicity Secretary, Lanre Issa Onilu, stated that what transpired in the Assembly was glaring to all.

“Furthermore, there is no dispute about the fact that the proclamation was not published. The constitution says you should publish and inform all members. So this is not something you need to do an investigation.

“The facts are staring you in the face. This is not a quarrel between two people. It’s when two people are quarrelling about issues that you say let’s investigate. The point is, was the law followed or was it not followed?

“And there cannot be a fiat accompli in this matter. The processes are regulated by law. We are not talking of an amorphous society or secret cult.

“Now let me ask you if a similar thing was done in the National Assembly, would there be the question that since it has been done what needs to happen next? If a foundation is faulty, you can’t roof the building.

“We must emphasize that processes need to be followed. We are cleaning up our processes. That is what change means to us in APC. Once processes are clean, outcomes don’t matter. Outcomes should reflect the will of the people. I don’t know how inauguration that violated every aspect of the law, tradition, norms, values can stand. If you fail an exam you re-sit.

“There is no dispute about the fact that nine people were involved, some against their will to purport to have inaugurated the Assembly. How is it that an APC governor cannot allow people to vote? You carry people by 9.30pm and purport to have elected a speaker. The danger of that is that if you can do it for Speakership purpose, you can also do it to make a law that is unpopular.”