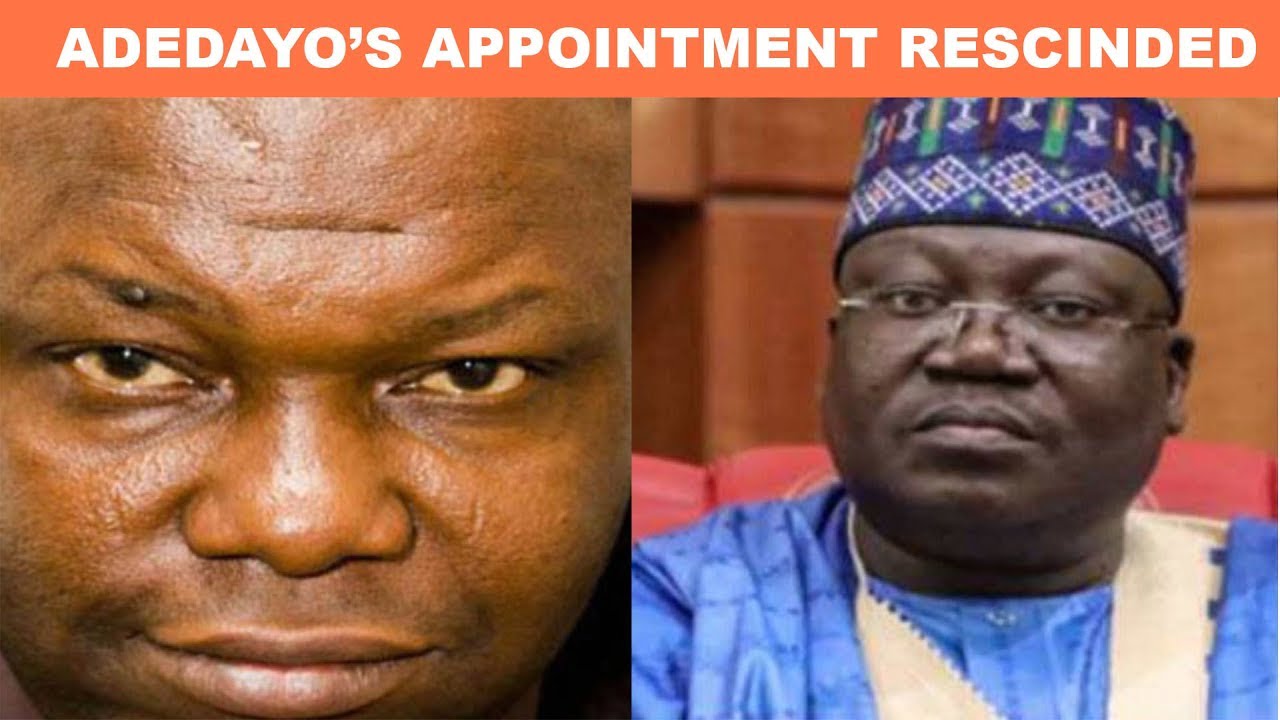 A storm of reactions by Nigerians has greeted the decision of the President of the 9th Nigerian Senate, Senator Ahmed Lawan, to withdraw the appointment of Dr. Festus Adedayo as his Special Adviser on Media and Publicity, bowing to pressure from some members of the All Progressives Congress (APC), Nigeria’s ruling party.

Naija News recalls that the Senate President appointed Adedayo as his Special Adviser on Media and Publicity on Tuesday, June 18.

Moments after the appointment was announced, some APC members took to the micro-blogging site, Twitter, to demand his sack on the ground that he campaigned and also wrote articles against President Buhari while being an aide to Bukola Saraki, the President of the 8th Nigerian Senate.

Barely 48 hours after the appointment was announced, Lawan on Thursday, June 20, rescinded Adedayo’s appointment in “his best interest.”

This online news platform understands that the development was made known in a statement issued by on Thursday in Abuja, Nigeria’s capital, by the Special Assistant to the Senate President on Media and Publicity, Mr. Mohammed Isa.

“The office wishes Mr. Adedayo the best in his future endeavours,” the statement sighted by Naija News added.

After Adedayo’s appointment was withdrawn, Nigerians took to the micro-blogging site, Twitter, to air their opinions on the matter.

24 Hours in the life of Ahmad Lawan, SP:

Afternoon- Proclaims Senate under him won't be a rubber stamp

Serving any branch of the @OfficialAPCNg Govt. is like serving Hitler's Nazis.God just delivered Festus Adedayo from the greatest calamity that could have possibly blighted and afflicted his brilliant and extraordinary life and career.He did not eat the King's foul meat and..1/

It seems the only one to have emerged a winner from this whole #SackFestusAdedayo fiasco is Festus Adedayo.

If you’re looking for a man with integrity, read his interview here.

I’ll be following his writing with interest. https://t.co/uQzgZIcKVs

Festus isn't even over the moon about the appointment. My kind of person https://t.co/mo200KSA6y

In fairness to Festus Adedayo, he did not apply for the job. In fairness also to SP Lawal, he probably has never met Adedayo. The main culprit is the person who recommended Adedayo. However, Nigerians are grateful to the SP for doing the needful @APCNigeria pic.twitter.com/gbV2VRC0Gd

Some of you APC and @MBuhari supporters, are so narrow minded that it makes one wonder…

So, it's not about Festus Adedayo's professional contribution to this position but about your political sentiment.
Is the Senate now the property of APC and their supporters?

After reading this I don’t know what else to say.
No matter the Government we find ourselves, even if I was in power, we need plenty of Festus Adedayo. https://t.co/mbZbhj67dj

Now that Dr Festus Adedayo appointment by the Senate President has been withdrawn,
APC Online Herdsmen can go and take the job.

THEY LOST THE PRINCIPLE THEY NEVER HAD, THE SUMMARY OF FESTUS ADEDAYO & PDP JOB SEEKERS IN APC

Unfortunately, you can't lose what you don't even have.
No, they aren't critics, they are desperadoes, ANYWHERE BELLE FACE (ABF)
They are #StandForNothing generation! pic.twitter.com/az8MpS3Qrx