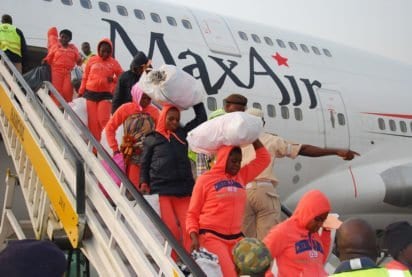 The figure is about the highest to arrive on a single flight since the repatriation exercise started in 2017, Daily Trust reports.

Other officials of the Federal Government at the Cargo wing of the Murtala Muhammed International Airport (MMIA) Lagos included those of the Nigerian Immigration Service (NIS), the National Commission for Refugees Migrants and Internally Displaced Persons (NCFRMI), among others

The Coordinator of NEMA Territorial Office in Lagos, Idris Muhammed, noted that the latest returnees were the 69th batch brought back by the International Organization for Migration (IOM).

In all, the females are 113 while males are 82 with adults as 131, children as 37 and infants as 27 including 3 males with minor medical issues and 7 pregnant women.

Muhammed while welcoming the returnees back to Nigeria, urged the youths to try and look inward and utilize the money they wasted on embarking on these perilous journeys for productive ventures in Nigeria.

Naija News recalls that one of the returnees, among the February batch, Adebisi Komolafe from Osogbo in Osun state said; “Despite the bad situation in Libya, the people believe in their leaders and are praying fervently for them. They still see hope in their country.

She, therefore, urged Nigerians to “avoid blaming the government for everything, with faith and sincerity, our prayers will be accepted by God”.