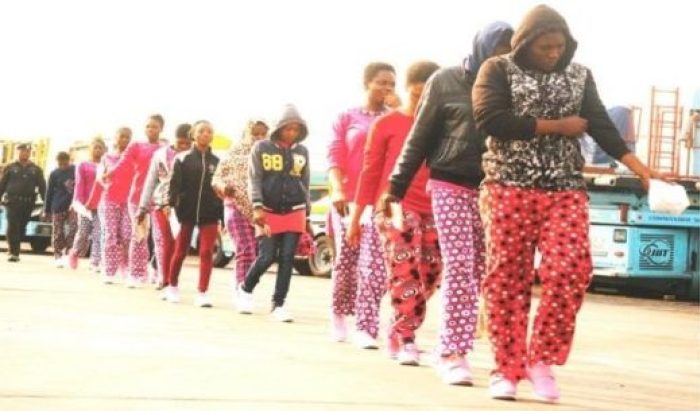 Another batch containing about 160 returnees have arrived the Cargo wing of the Murtala Muhammed International Airport, Lagos.

Naija News reports that the returnees which consist of 79 male adults, two male children and five male infants making up 74 females and 86 males, arrived at the airport at 7:50pm late Thursday, February 14.

The returnees were brought back by the International Organisation for Migration (IOM) and European Union under the Assisted Voluntary Returnees (AVR) Programme.

“The returnees are made up of 68 female adults, one female child and five female infants.

Muhammed advised Nigerians particularly the younger ones who are in search of greener pastures to desist from embarking on irregular migration which removes the fundamental rights that such migrants could have enjoyed.

While narrating her ordeal, one of the returnees, Adebisi Komolafe who hails from Osogbo in Osun state said; “Despite the bad situation in Libya, the people believe in their leaders and are praying fervently for them. They still see hope in their country.

“If Nigerians can avoid blaming government for everything, with faith and sincerity, our prayers will be accepted by God.

Another returnee, Miss Aisha Ibrahim who hails from Oyo state said she thought travelling would better her life but rather her trip wrecked her ambitions.

In her words, she lamented; “My sister paid for my transportation and after a week on arrival in Libya, I got a housemaid work.

“You must work and carryout any instructions given by those people. Failure to obey them will attract punishment or arrest.”