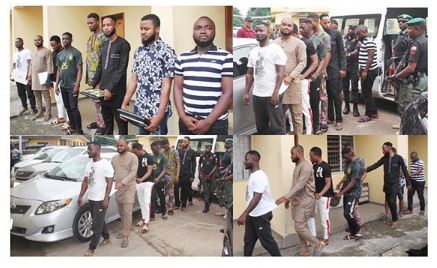 Naija News reports that the suspects were apprehended on Tuesday, May 21, for their alleged involvement in internet crime.

The arrest of the suspects is in line with the directive of the chairman of Nigeria’s anti-graft agency, Ibrahim Magu which is to get rid of cybercrime among other internet fraudulent activities in the Nigerian society.

The names of the arrested suspects were given as; Adesanmi Abiodun, Olasupo Emmanuel, Segun Amudah, Aina Oladipo, and Babatunde Olawuyi.

Others are Oluwaseyi Emmanuel Fagbemiro, Felix Onyebuchi, and Abdulazeez Ismaila.

They are expected to be arraigned before a court of competent jurisdiction on the completion of investigations by the EFCC.

The arrest of the suspects comes at a time that a popular Nigerian singer and “IsaGoal” crooner, Naira Marley was apprehended by the EFCC over allegations of his connection in credit card fraud.

Naira Marley was on Monday arraigned with an 11-counts charge levelled against him by the anti-graft agency.