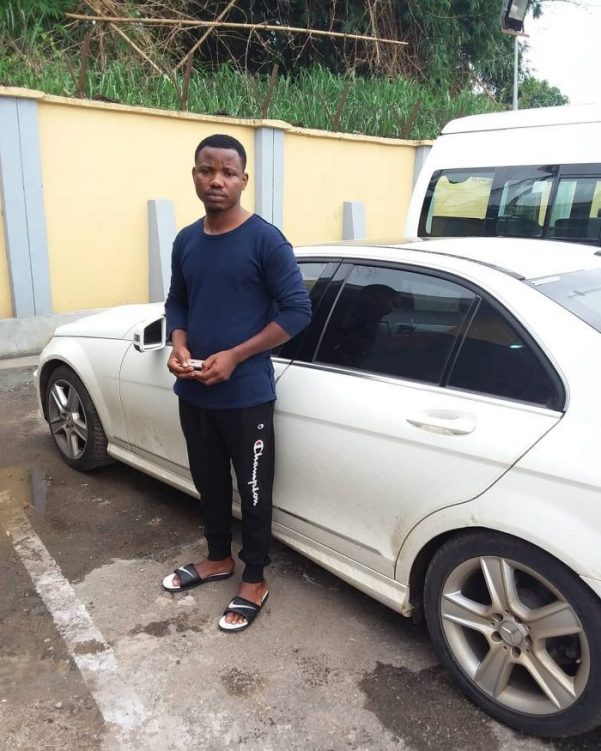 The operatives of the Benin zonal office of the Economic and Financial Crimes Commission (EFCC), have apprehended another suspected internet fraudster, popularly known as ‘Yahoo Boy.’

Naija News reports that the Benin zonal office of the Nigeria’s anti-graft agency gave the name of the suspect as Michael Ehizele who was arrested in his home in Benin, the Edo state capital.

The EFCC revealed that the arrest was made in collaboration with a sister security agency, in line with the directive of the acting executive chairman of the EFCC, Ibrahim Magu which is to rid the society of internet fraud, cybercrime and its affiliates.

Upon his arrest, three phones and an exotic car, Benz C300 AMG were recovered from him.

Ehizele’s arrest comes despite the ordeal that Nigerian artiste, Naira Marley currently faced in the previous weeks in the net of the EFCC.

Naija News recalls that Naira Marley was arrested in the early hours of Friday, May 10, a day he was supposed to mark his birthday in grand style.

Naira Marley was arrested in the company of Zlatan Ibile and three others but subsequently, Zlatan was released alongside the three others while Naira Marley was held back as the EFCC claims to have a piece of strong evidence retrieved from his laptop and phone and were more than enough to prosecute him.

Apparently, Naira Marley was on Monday, arraigned before a court of competent jurisdiction by the Nigeria’s anti-graft agency. He is charged with an 11 count charge bothering on internet fraud, among others.