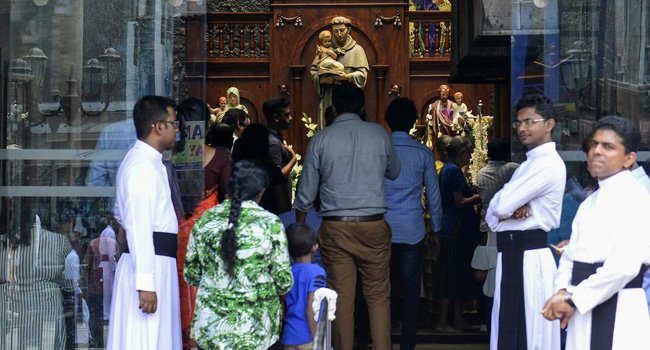 Activities Gradually Pick Up At Bombing Site At Sri Lanka

Sri Lanka’s St. Anthony’s church, one of the affected site in Easter Sunday Bombing has partially opened for worship Tuesday even as security forces were rebuilding a shrine inside.

The faithful were allowed into a section of the church to pray before a statue of Saint Anthony, said Father Edmond Tilakaratne, spokesman for the Archbishop of Colombo, Cardinal Malcolm Ranjith.

He said pilgrims will be allowed into the special area of the church for a 12-hour period.

Three policemen and three women frisked pilgrims lined up to enter the shrine while heavily armed navy personnel and police kept watch outside.

The 1740 church shares a boundary wall with the port of Colombo. New steel barricades were established Tuesday to prevent vehicle access to the church building.

St. Anthony’s was among the three churches attacked by jihadi suicide bombers in coordinated attacks that also targeted three luxury hotels in Colombo on April 21.

Naija News recalls that 257 people were reported, killed and nearly 500 wounded. At least 44 foreigners were among the dead. Nearly 50 of the victims were young children.

The St. Anthony’s is venerated not only by Catholics but also by followers of other religions in this majority Buddhist nation.

Christians make up 7.5 percent of the 21 million population of the majority Buddhist Sri Lanka, AFP reports.