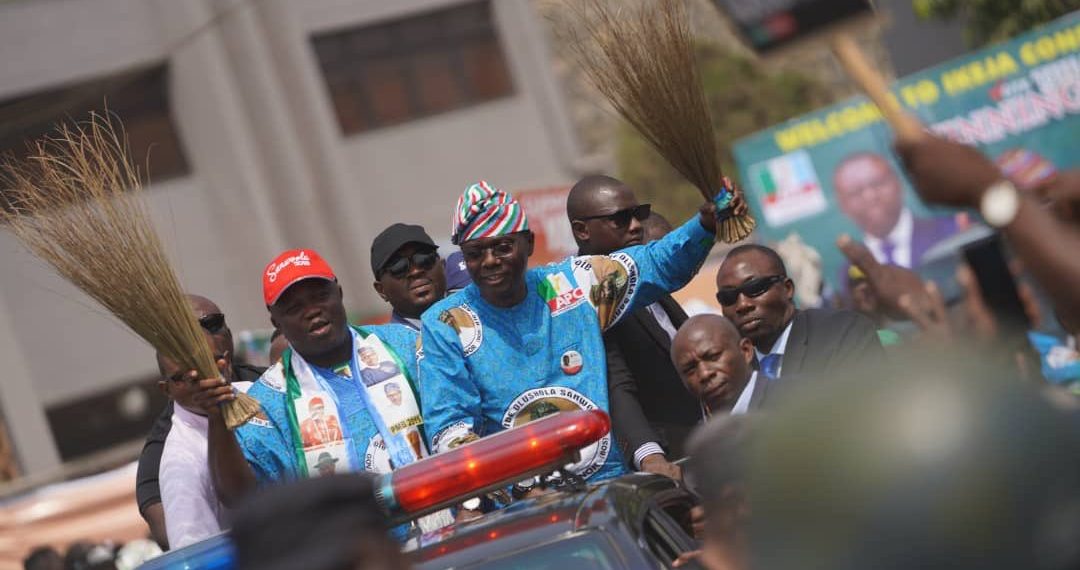 Ambode ‘Hands Over’ To Sanwo-Olu In Lagos APC Rally

Governor Akinwunmi Ambode has urged residents to embrace a “government of continuity” by accepting and voting in the All Progressives Congress (APC) flag bearer, Babajide Sanwo-Olu, as Governor.

Ambode who was speaking before a massive crowd at the Government Reservation Area (GRA), Ikeja yesterday said, “By this handing over, we believe we will all join hands to make him the next governor of Lagos State.”

Naija News however reports that the well-attended rally was disrupted by hoodlums who invaded the rally venue while party chieftains were concluding their remarks. They were said to belong to rival drivers’ unions. They shot guns and wielded other dangerous weapons.

The Lagos state police command have since declared Mustapha Adekunle a.k.a Segio wanted in relation with the attacks.

In Ambode’s speech, he wished the party supporters a happy New Year, acknowledged the endorsement as a sign of good things to come during the election.

Reflecting on the challenges ahead, the governor said: “The APC campaign is a united campaign in this state and we are going to do it together.”

In his view, Lagos deserves a government of continuity that will build on the achievements of former Governors Bola Tinubu, Babatunde Fashola and the current administration.

Ambode stressed, “Lagos State has witnessed progressive growth in the last 20 years, since 1999. Why have we been experiencing progressive growth? The answer is very simple: I have had predecessors who have actually delivered on their promises.

Other speakers at the rally, include party Chairman Tunde Balogun, Asiwaju Olorunfunmi Basorun, Senator Tony Adefuye and Chief Lanre Rasak, urged party members and supporters to prepare for the poll.