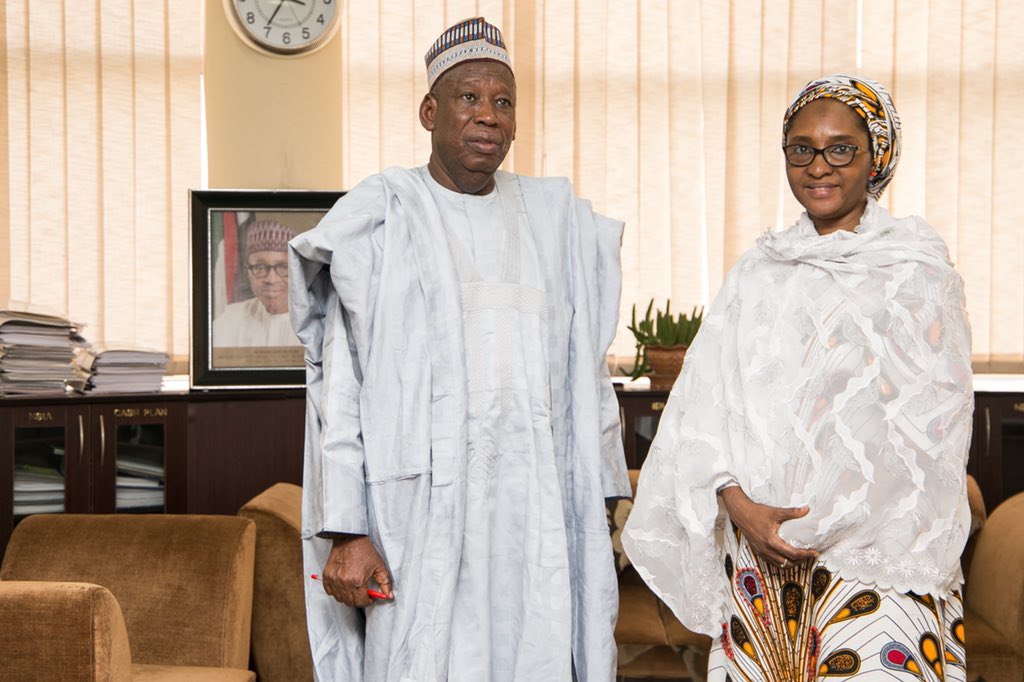 According to a statement by her Special Adviser on Media and Communications, Mr Paul Abechi, Ahmed gave the Federal Government's assurance when she received Gov. Abdullahi Ganduje of Kano State in Abuja.

But seriously, apart from Gandollar, I think this governor is really putting a good project through in Kano. But I wish more improvement are been done in the health and the malnutrition crises been reported among children.

But seriously, apart from Gandollar, I think this governor is really putting a good project through in Kano. But I wish more improvement are been done in the health and the malnutrition crises been reported among children.

Ahmed said that the project would improve the industrialisation plan, growth and employment generation for the state.

"Let me assure you that it is not an issue of if this project will take place but when, because we have a very huge power gap and it is more in the northern part than in the south."It is for this reason that when we see an opportunity like this, we have the responsibility to ensure it comes into fruition.

Earlier, Ganduje said that his government would provide protection against the financial risk of the power project by setting up the Kano State Bulk Electricity Trading Company (KBET).

"The Kano State Government is committed to industrialising Kano as a critical component of its development plans. The shortage of electricity has been the principal factor hindering progress in this area."To this end, we welcome the opportunity offered to us by QIPP to guarantee stable supply of 540MW of electricity.

"We trust this will support the industrialisation of Kano and perhaps even neighbouring states like Kaduna, Jigawa and Katsina which have significant and critical unmet requirements for electricity.

"We request you to kindly approve the request made by QIPP as the FG will not be assuming any risks before financial close. "On our part we are ready to start the process of setting up KBET through an Act of the State House of Assembly and once this is done, we will be in a position to provide the guarantee backing its obligations.

"We will also set up a steering committee and start engaging investors now that we can give them assurances of available electricity once QIPP comes on stream in three years. "We consider this a win-win situation all round," he said.

For Minister @ZShamsuna it is not a matter of if, but when, the Qua Iboe Power Plant (QIPP) will take off as she has confidence in the partnerships involved. She added that any opportunity, such as this, to fill the huge power gap in Nigeria, will not be left to slip. pic.twitter.com/ay2nlLyaHS

The governor said the visit was a follow up to a letter he recently sent to the Minister of Finance highlighting the understanding reached with other partners in the project.

The letter reads in part, "This funding is conditional upon the guarantee of your Ministry for a power purchase agreement (PPA) to be executed between QIPP and the Nigeria Bulk Electricity Trading Company (NBET).

"Exxon-Mobil is also prepared to commit about 500 million dollars to build a gas pipeline from its deep off-shore platforms to supply the gas needed for QIPP to operate.

"The total Foreign Direct Investment (FDI) for this project amount to 1.7 billion dollars.

"QIPP has also assumed completion risk of a transmission line from Ikot-Abasi to Ikot-Ekpene in order to ensure supply of power to the national grid.

"The Transmission Company of Nigeria (TCN) has given firm assurance that, once power is delivered to Ikot Ekpene, TCN will be able to deliver an equivalent amount of power to Kano on a binding contractual basis for a fee.

"We further understand that, the country is at risk of losing this huge investment of 1.7 billion dollars.

"This is because of the reluctance of the Federal Government to assume additional unhedged financial risk on the power sector given the current experience with Azuru and other players," it said.

Recall the meeting of Minister @ZShamsuna with Black Rhino Group led by the Emir of Kano on the Qua Iboe Power Plant and PPP arrangements. Kano State Government has expressed interest in purchasing the electricity generated by QIPP. https://t.co/J57zpyFe1H pic.twitter.com/GJifekFUvi