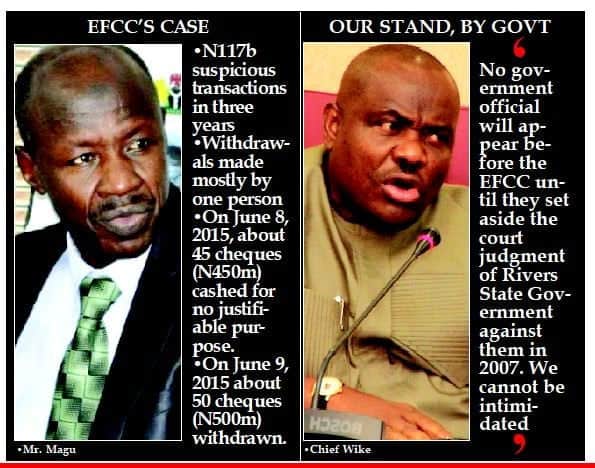 Over the N117B money laundering being probed in Rivers State finance by the Economics Financial Crimes Commission, Governor Nyesom Wike has said no official of the government will appear before the agency.

The Governor insisted that the Court of Appeal judgment barring the commission from investigating the state is still effective.

Naija News recalls that EFCC has shortlisted four officials of the state to be probed over the large sum of money.

In a statement yesterday, the governor’s Special Assistant on Electronic Media, Simeon Nwakaudu quoted Wike as describing the EFCC’s action as a “political witch-hunt”.

“We are not afraid of their probe and they have no power to probe us,” Wike said, adding:

“No government official will appear before the EFCC until they set aside the court judgment of Rivers State Government against them in 2007. We cannot be intimidated.

“They filed for leave to appeal the judgment at the Court of Appeal. Until they set aside the judgment, we will not come.”

Wike said the “media trial” by the EFCC would amount to nothing, pointing out that the government was aware of the move before it even started.

“We are aware of their tricks. They should not bother engaging in media trial because it will not work. This is mere political witch-hunt.

“They must obey the court of law. We have filed another action against the EFCC. Because they have been served, they are telling the press that they have started investigating Rivers State Government.

“This media war by the EFCC will not work. We stand on the rule of law.”

Also yesterday, the state government, in another statement, called on the EFCC to leave the state alone to concentrate on delivering the dividends of democracy to the people.

The Commissioner for Information and Communications Mr. Emma Okah, said the Rivers State Government is not answerable to the EFCC until the court says so.

In 2007, the State took the EFCC to court over interference with the State’s finances and the court restrained the EFCC from probing the accounts of Rivers State as the State was accountable only to the House of Assembly. The injunction is yet to be set aside.

“We plead the injunction and advise the Commission to respect the laws of the land as anything short of this is equal to political blackmail,” the statement added.

The government said it “is not against the fight against corruption but insists that such fight must be within the ambit of the law and not as a tool of political witch hunt”.

Recall also that some individuals have expressed opinions, supporting the rivers state stand that EFCC does not have a right to investigate the state Fiance, Naija News reports.

I'm confused & need clarifications:
Who investigates FG expenses?
Does EFCC have control on State finances, even as it's the creation of the FG?
Are States not independent?
Shouldn't the EFCC concentrate on Federal institutions?
What was the main purpose of establishing EFCC?

Constitutionally EFCC does not have the jurisdiction to investigate a State, however, it can investigate an Indigene of the state concerning its finances, but has to be given mandate by the State House of Assembly. He is speaking from an informed position of the Law. https://t.co/CLoDIukuiA