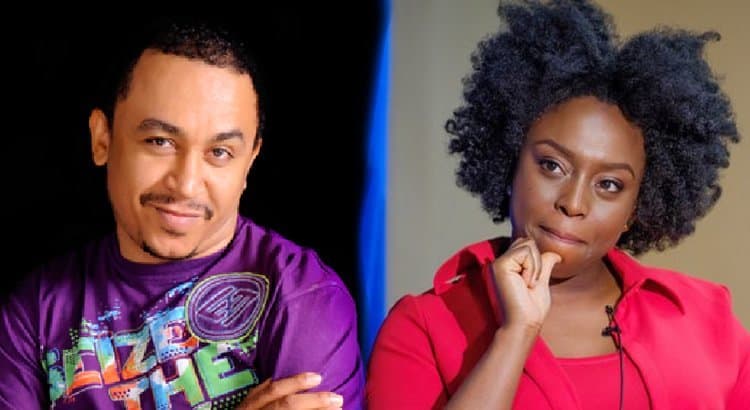 A controversy has been raised by popular on air personality, OAP, Daddy Freeze, who tackled celebrated writer, Chimamanda on her take on chivalry and feminism.

Freeze, who is known for his controversial take brought into play reactions after he wrote an open letter to Chimamanda following her recent comments on chivalry.

He downplayed her feminist ideologies, stating that the female gender had the innate belief that men must bear the greater weight of a physical burden.

Freeze backed his allegation by sighting an incident he witnessed some days ago. He said, “Dear Chimamanda, yesterday, while driving home from our online church service held on the radio, I saw a broken down ‘Danfo’ bus. All the women remained on the bus, while the men assisted the conductor in pushing the bus, as the driver tried his best to jump-start it.”

Freeze, however, said wisdom was important when tampering with the innate characteristics of both genders, to avoid stirring up unwanted consequences.

“The other day you spoke of chivalry in a cute way, although your understanding of the word seemed questionable, your motives were nonetheless benign,” he said.

She stressed that her issue with chivalry was how people made women look weak and in need of protection, adding that women and children were not meant to be classified in the same group.

However, Freeze’s position sparked mixed reactions amongst the male and female folk in Nigeria.

While a number of women on several blogs and social media are undecided on his view, the males are.

While one of the commentators cautioned Chimamanda on what he saw as extreme feminism, another said, “I can never understand why everyone seems to misunderstand Chimamanda. Listen to what she said! She says that she herself likes the idea of chivalry and likes it when men open the door for her but she hopes they are opening the door not because they think she’s weak but because they are polite and ultimately we should all be opening door for one another regardless of gender.”

For Ibitox, Chimamanda has a lot to learn from Freeze’s views. He said, “I must give you kudos for this brilliant and well articulated write-up. I hope and pray the lady in question gets to see this and probably meet you for some good lectures about humanity in general.“