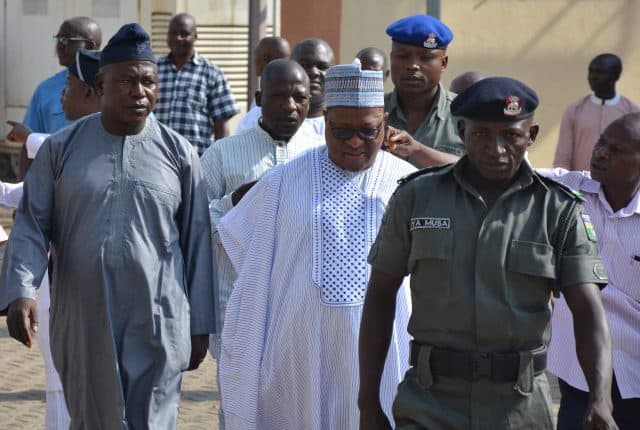 In less than one month, the Economic and Financial Crimes Commission (EFCC) have secured two high profile convictions against two former State governors, one of them, a serving member of the Nigerian Senate.

Jolly Nyame and Joshua Dariye, former governors of Taraba and Plateau States respectively, were both handed a 14-year prison sentence each for embezzlement of state funds.

Both individuals, who won their governorship positions on the platform of the Peoples Democratic Party (PDP), had cross-carpeted into the ruling All Progressives Congress (APC) hoping to find sanctuary.

As Nigerians applaud the EFCC for these significant successes in the anti-corruption campaign, many have set their sights on other former state chief executives who have corruption cases pending in court and could end up like Nyame and Dariye.

In April 2017, Jonah Jang, the immediate past Governor of Plateau State, raised alarm that the EFCC was planning to break into his house in search of looted funds.

Jang said his house was open for searching, but warned that anyone who breaks into the house must repair the damage.

“If they (the EFCC) think I hide money in the ceiling or anywhere, they should have equipment that can trace the money, but if they come to start breaking walls, they will repair my house because they will not find a kobo, I didn’t steal money.”

Well, it is not clear whether the EFCC raided Jang’s house, what is not in doubt is that the former governor, now serving senator, is currently facing a 12-count charge of misappropriation of funds to the tune of N6.3billion, at the Plateau State High Court, Jos.

Jang was said to have pocketed the sum of N2 billion released by the CBN for small and medium scale enterprises under the Micro, Small and Medium Enterprises Development Funds, MSMEDF. Also, he was accused of abusing his office as governor by diverting N4.3 billion from the state coffers in connivance with Yusuf Gyang Pam, who was the Secretary to the State Government at the time.

Though he pleaded not guilty to the charges, Jang has done his first round in prison after he was remanded briefly pending his bail application. He spent at least one week behind bars – between May 17 and 24, 2018 – before he was granted bail in the sum of N100 million.

In one of the suits, Suswam and Oklobia were alleged to have embezzled N3.1 billion, and in the other, both men and another defendant,  Janet Aluga, a former accountant of the Benue State Government House Administration, were said to have conspired to divert N9.79 SURE-P funds.

This is in addition to other criminal allegations against Suswam, which includes illegal possession of firearms.

In February this year, a bureau de change operator told the court how he helped Suswam to convert N3.1 billion into dollars and delivered it to his house in Maitama, Abuja.

Suswam’s two terms as governor in Benue State were characterised by several months of unpaid workers’ salaries and incessant strikes; it is unlikely that he will have many sympathizers.

The cases are still ongoing.

Uzor-Kalu ruled Abia State with an iron fist between 1999 and 2007, but unlike his immediate successor, Theodore Orji, he was not successful in his numerous attempts to win a seat in the senate.

He is also one of the many who had embraced the broom-revolution of the ruling APC, but so far, like the cases of Nyame and Dariye, it appears there is no respite in sight for him.

As at April 2018, the EFCC had called a total of 16 witnesses to testify in the corruption trial brought against Uzor-Kalu before the Federal High Court, Lagos.

Uzor-Kalu and some of his officials during his time as governor are accused of having diverted a total of N3.2 billion naira belong to Abia State, into Slok Nigeria Limited, Uzor-Kalu’s private company.

Should he go the way of Nyame and Dariye, it will go a long way in proving to Nigerians and the world that the anti-corruption campaign of the present administration is not mere lip service, as Uzor-Kalu is seen as one of the most powerful politicians from the South East region.

The former Niger State strongman is in court facing charges of defrauding his state of over N3 billion during his period in office. Aliyu was charged alongside Umaru Nasko, who served as his chief of staff, before running for the post of Governor in 2015 but failed.

Aliyu, like Jonah Jang, has had his taste of prison life, having been remanded at Tunga prison, Minna from April 25 to May 3, 2017.

The matter is still ongoing in court. Meanwhile, nothing has been heard with regards to threats by Aliyu to sue the federal government for daring to include his name in the looters list published in April this year.

The former governor had described the inclusion of his name in the list as an attempt to tarnish his image.

“I demand that my name be cleared on this matter. I may consider other options as a citizen whose right as guaranteed by the constitution of the federal government has been breached. I will not be used to serve interest of anybody or political party. I will not allow this matter to slide without justice,” Aliyu warned.

It has been over two months now, the list is yet to be withdrawn by the FG, Aliyu’s name is yet to be struck out, and Aliyu is yet to make it rain.

The case is still ongoing before Justice Okon Abang of the Federal High Court, Abuja.

This story was first published on ICIRNigeria.org