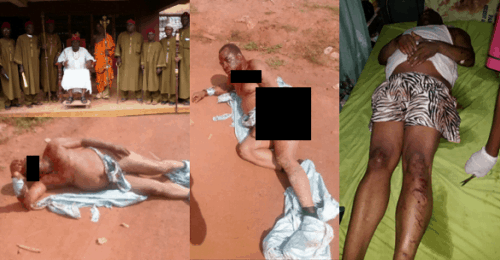 Traditional Ruler Died As A Result Of Injury Sustained

The environs of Ogbovine Akpugo community in Nkanu West LGA of Enugu State was on Tuesday thrown into disarray after the report of the killing of Igwe Stephen Nwatu, a traditional ruler stormed the community.

The traditional ruler, who was a retired police officer, was reported dead on Tuesday, after the alleged report of an attack on him by some people suspected to be his subjects.

Report has it that the disagreement between the traditional ruler and his subjects started two years ago, but escalated recently when the state government disbursed N5 million each to all the 450 autonomous communities in Enugu State.

Although the cheques for the state government’s ‘One Community, One Project’ scheme were handed over to traditional rulers, Igwe Nwatu was said to have been denied the cheque for his community, following the conflict between him and his subjects.

The denial of the cheque was said to have made Nkanu walk out on the Chief of Staff to the governor, Mr. Festus Uzor and other state government officials in anger.

Further statement release as it that state government invited the traditional ruler and his aggrieved subjects to a peace meeting on Monday night, but before the meeting could hold, a fight broke out in the community.

The traditional ruler was reported severely beaten up by his subjects and was later reported dead in a hospital in the early hours of Tuesday.