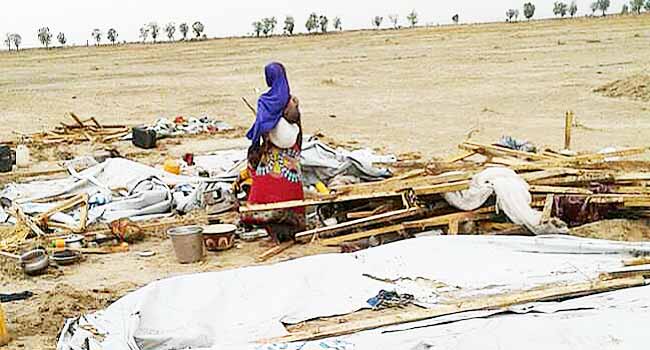 The Katsina State Emergency Management Agency (SEMA) yesterday said that six different individual shave been killed by awindstorm in Kastina metropolis and it environs, Naija News understands.
the executive secretary of the agency ,Aminu Waziri who disclosed this during a media briefing in Katsina, said 500 houses were also damaged by the disaster which occurred Thursday evening.
Mr Waziri said five persons sustained various degrees of injury in the disaster while property worth over N100 million were also destroyed.
“The areas affected were Shinkafi, Modoji, Ambassador, Makera, Kampany and Kambarawa, located at outskirts of the metropolis.
“The Army Barracks and the Air Force Base were also affected by the disaster,” the executive secretary said.

He said 53 houses, a primary school and about four parameter fences were destroyed in the army barracks while about 100 houses were also damaged at the air force base.

Mr Waziri also said the agency had already sent its officials to assess the extent of damage with a view to providing relief to the victims.The executive secretary described the windstorm as a national disaster which was beyond human control.