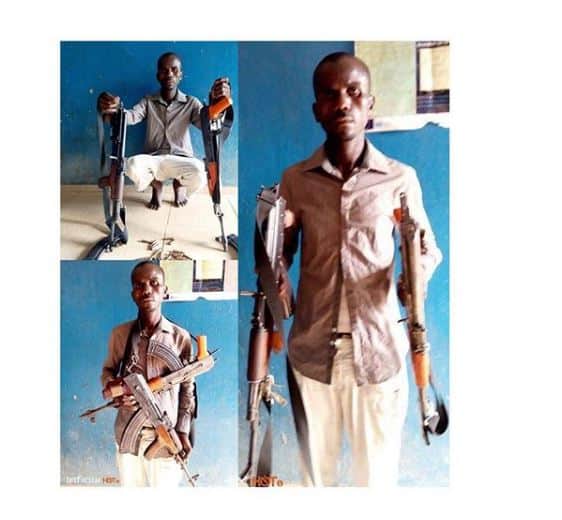 Police operatives attached to the Intelligence Response Team, IRT, have arrested one of the leaders of the killer-gang responsible for kidnappings and deadly attacks in Birnin Gwari, of Kaduna known as Barau Ibrahim.

Ibrahim who is also known as ‘Rambo’ was arrested with two AK-47 rifles with 51 rounds of live ammunition.

According to the police, “on Sunday, May 13, 2018, at about 1.30 am, based on credible intelligence, IRT operatives attached to Operation Absolute Sanity launched by IGP Ibrahim Idris arrested one of the most wanted kidnappers/armed robbers and killers within Maraban Yakawada, Giwa local Government Area of Kaduna State.

“Named Bara’u Ibrahim aka Rambo, who became prominent in the crime world for operating with two AK-47 rifles and his abilities in firing both at the same time during their operations in Kaduna and Zamfara states.

“IRT operatives recovered two AK-47 rifles with S/numbers: AD160102 and 1978AD4328 with 51 live ammunition in the operational VW Golf car of Rambo, which was equally recovered.”

Naija News recalls that the recent attacks on Birnin Gwari, in Kaduna state, led to the loss of several lives and has been widely condemned.

As part of efforts targeted at improving security in the area, President Buhari also approved the establishment of a military base as well as additional police commands in the area.