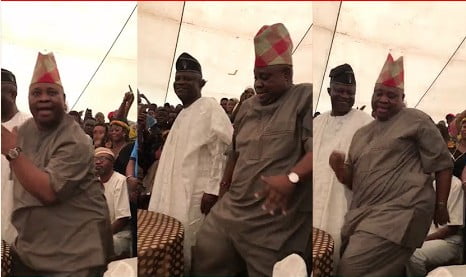 The Senate has sworn in Ademola Adeleke as the senator representing Osun west senatorial district.

The senate president, Bukola Saraki, administered the oath of office to Adeleke on the floor of the upper chamber on Wednesday.

He would replace Isiaka Adeleke, his late brother who previously occupied the position.

A Peoples Democratic Party (PDP) senator, Adeleke defeated Mudashiru Hussein of the All Progressives Congress (APC) in the bye-election on Saturday.

The Independent National Electoral Commission (INEC) presented him with a certificate of return on Monday.

Adeleke who defected from the APC to PDP said the ruling party in his state does not practise democracy.

“I used to be in the Peoples Democratic Party (PDP) but I am back home now,” Adeleke had said.

“My interest was in APC, but it was when I got there, we discovered that they don’t practise democracy.”

Meanwhile, the supreme court, on Wednesday in Abuja, in an unanimous decision by a five-man panel of Justices, handed leadership of the Peoples Democratic Party to the Senator Ahmed Markafi-led National Working Committee.