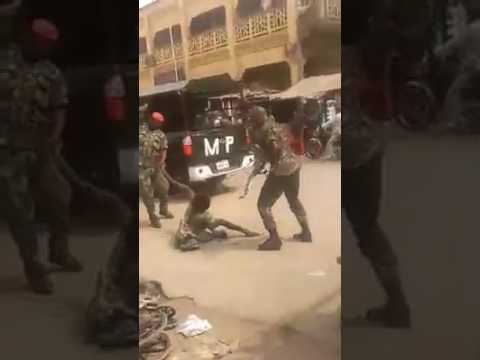 Ebonyi state governor David Umahi,has given the sum of N500,000 to Chijioke Oratu a physically challenged man, who was assaulted by two soldiers for wearing camouflage in Onitsha, Anmabra state.

Umahi while receiving the victim, who is an indigene of the state, at the chambers of the Government​ House, in Abakaliki, on Tuesday, February 14, also demanded the immediate sack and prosecution of the two soldiers.

The governor gave N500,000 to the victim to aid his recovery and rehabilitation and promised to empower him by setting up a business for him.

Oratu, crippled in both legs, was beaten by two armed soldiers after being dragged off his wheel chair, as shocked onlookers stood by helplessly.

The video of the attack went viral on social media sparking outrage.

The Nigerian army swiftly responded by arresting the 2 soldiers responsible.

READ ALSO: Crippled man who was brutalized by soldiers located

Spokesperson Sani Usman, a Brigadier General, in a statement said the culprits, Bature Samuel and Abdulazeez Usman, who were both corporals, had been demoted to privates and imprisoned for 21 days with hard labour. They are to also forfeit their pay for the 21 days.

But the governor said the 21-day imprisonment given to the soldiers was not enough.

Umahi also directed his senior special adviser on welfare and religious matters to liase with the victim and his family on the best way to resettle him.