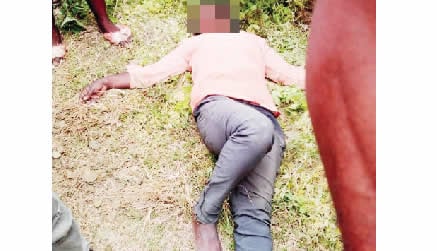 Omowumi - Woman Who Threw Her Two Daughters Inside Well

The Osun State Command of the Nigeria Police Force has launched an investigation into the deliberate killing of two children in the state.

A woman whose sanity is currently in doubt is said to have thrown her two daughters into a well.

The resident of Anjoorin Street, Koledowo community, Osogbo, simply identified as Omowumi reportedly committed the offence on Monday, November 1 but no one took note of her actions until the following morning, Naija News learnt.

Efforts by residents, as well as officials of the State Fire Service on Tuesday to recover the bodies, prove abortive as the children have spent many hours already struggling for their lives.

Naija News understands that Omowumi who according to reports had just returned to Nigeria from a country in the Middle East has since been arrested by the police.

In his contribution to findings on the incident, a shop owner in the area, who spoke on condition of anonymity, said the children were thrown into the well on Monday night.

He said, “The incident happened late on Monday but many people did not hear about it till this afternoon (Tuesday) when men of the Osun State Fire Service arrived to recover the bodies.

“The woman was accused of throwing her two daughters into the well. The suspect was also with us at the scene, as the firemen tried to recover the bodies. But they could not and they left. Policemen later took the suspect away.”

Reacting to the disturbing event, spokesperson for the Osun State Fire Service, Ibrahim Adekunle, said operatives deployed in the scene could not recover the bodies because of the volume of water in the well.

He said, “The incident happened late yesterday (Monday), but we were informed this afternoon (Tuesday).

“The mother, a middle-aged woman, accused of throwing her two children into the well, was reported to be suffering from insanity.

“The children were identified as Nimisire Saka, 5, and Darasimi Saka, 8.

“Efforts are underway to get them out. But at the moment, we have yet to recover them as the well is filled to the brim.”

On his part, the state Police Public Relations Officer, Yemisi Opalola, said “The perpetrator, Omowumi, is suspected to be of unsound mind. She committed the act on Monday. The investigation has commenced into the matter.”