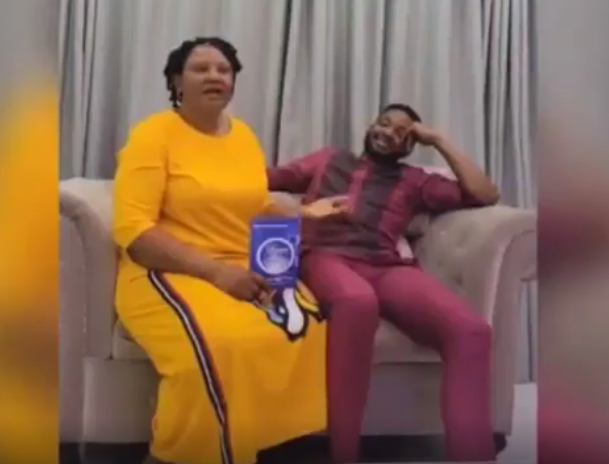 A video has emerged online where the mother to a former housemate in the Big Brother Naija reality tv show, Cross, noted that she wants to use his platform to preach the gospel.

The video was released hours before the reality star posted his nude video on his social media platform.

Cross, however, has deleted the post which has generated a barrage of reactions online.

It was unclear whether Cross intentionally posted the video or it was a mistake, his caption to the already deleted video, however, read, “Shower Time”.

The mother to the reality star in her statement had said companies are coming for her son and desire to have him as their brand ambassador, however, she wants him to be an ambassador for Christ.

She further stated that while Cross is being paid by these companies, he would propagate the gospel and help her fulfil her calling on earth for free.

This is coming a few days after the sex tape of award-winning Nigerian singer, Tiwa Savage emerged online.

The video has stirred reactions online with some lamenting that the development would have an effect on her son in the future.

Darlington in a video claimed that the award-winning singer intentionally released the video which has been widely condemned online.

The rapper in an Instagram live video accused Tiwa Savage of releasing the video to remain relevant in the music industry.