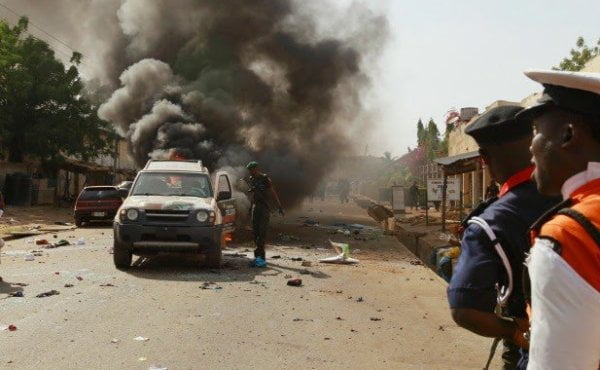 Members of the Islamic State in West Africa Province (ISWAP) have destroyed four high tension towers that supply electricity from Damaturu to Maiduguri in Borno State.

It was gathered that the terrorists blew up the electricity facility on Friday night.

According to Daily Post, the incident which occurred in Garin Kuturu village, about two kilometers away from Auno, started precisely around 7 pm and lasted up to 10 pm.

An eyewitness stated that four towers were completely destroy, while the fifth is about to collapse.

“With this development, I don’t think Maiduguri will have light again soon. While the government is talking about restoring the lines I think it is time they started talking about solar since we have it in abundance and forget about trying to reconnect the state with the national grid,” Dauda Habu, a resident of Polo GRA disclosed.

This is coming barely two days after ISWAP reportedly attacked and killed many Nigerian soldiers in an ambush in Borno State.

It was gathered that the terrorists attacked the troops on Thursday in Monguno, which is over 100km north of Maiduguri, the state capital.

Military sources revealed that Boko Haram/ISWAP killed many soldiers during the attack that lasted for many hours.

The source revealed that military vehicle, several weapons and ammunition were stolen during the attack.