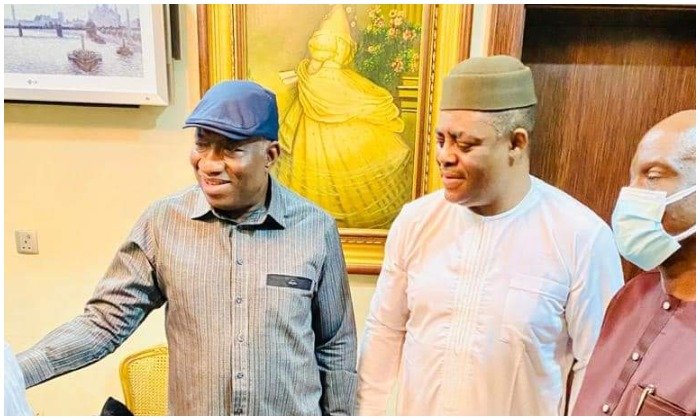 Jonathan during a visit to the home of Fani-kayode

A public affairs analyst, Christie Obiaruko Ndukwe has reasoned that the defection of former Aviation minister, Femi Fani-Kayode from the Peoples Democratic Party (PDP) to the All Progressives Congress (APC) is an indication that former President Goodluck Jonathan will soon be jumping ship, and that it was to make way for the latter’s emergence as President in 2023.

Naija News had reported that the APC Caretaker Committee Chairman and Governor of Yobe State, Mai Mala Buni led Fani-Kayode, a staunch ally of Jonathan, to meet with President Muhammadu Buhari at the Presidential Villa on Thursday after which the former critic of the President and his party, announced his defection.

He went on to tell a bewildered nation that he was led by the Spirit of God in his decision and that he joined the APC to help unify the country as he was against anything that would cause the disintegration of Nigeria.

Offering a clearer insight into why APC poached Fani-Kayode from the PDP, Ndukwe posited, “Fani-Kayode is more of a forerunner in the spirit and likeness of John the Baptist, but this time around, he would be positioned to take to the cleaners the PDP leadership if they ever ventured into antagonizing Jonathan and his expected decision to throw in his heart into the ring”.

Other aspects of the article read, “Who could have suspected that the very outspoken former Minister of Aviation and Information, respectively, and spokesman of the PDP during the last Presidential election which Jonathan lost out gallantly to Buhari, would be visiting the President, whom he had severally and roundly condemned?

“This big developing story is coming just 24 hours after President Jonathan’s media aide had dismissed the rumored defection of his boss to the APC, in preparation to fly the latter’s flag in the 2023 Presidential election. Is there not a cause? Only political watchers without bias can think deeper than parochial thinkers and understand the real reasons for FFK’s defection.

“The Jonathan agenda for 2023 may not have been his original idea but the consideration to return to Aso Rock for a single term of four years after Buhari’s eight years is a sweet pie no ambitious politician can reject, particularly when the masterminds of this controversial move are from the political stronghold of Nigeria – the Northern kingmakers. In as much as we may detest this myth, that power comes from the North, it is an incontrovertible truth that the North determines who gets what in the political context of Nigeria. This can only be a lie in the imagination of those who wished otherwise.

“The plot to lure him into the race is definitely not because of the sympathy they have for Jonathan but for the selfish agenda of positioning the North yet again, after a single term of four years, which Jonathan is now only eligible for.

“It is becoming clear that many of his footsoldiers like Senator Stella Oduah have in recent times moved ahead of their Master, Jonathan, in preparation for his second coming. And the executors of this agenda seem to be succeeding with the baptism of FFK, yesterday, into the APC.

“While we watch unfolding events in the next couple of weeks, FFK will be busy with what he knows how best to do, but now against those he once walked the same path,” the Port Harcourt-based commentator said in her article.